Los Angeles, CA — For those who keep track of top prospects in MMA, Adam Borics has been on the radar for a while. However, Borics (14-0) really exploded last year with a flying knee knockout of fellow rising star Aaron Pico.

That finish landed him a rather high profile assignment: a berth in the featherweight grand prix.

Borics then dispatched former champ Pat Curran by TKO in the opening round of the tournament. At Bellator 238 this weekend in Los Angeles, he’s back in action, this time in the quarterfinals opposite Darrion Caldwell.

Speaking to Cageside Press on Thursday, ‘The Kid’ explained that when he really was a kid, it was a certain Brazilian featherweight that inspired him. “My hero was Jose Aldo. I loved his style. I was like ‘I want to fight like this guy.'”

Maybe that explains the big finishes. These days, of course, Aldo is down a weight class, circling a title fight against Henry Cejudo in rival UFC. “I don’t like to see him at bantamweight,” said Borics. “For me, he looks bad. I mean, he looks skinny. I loved him in featherweight.”

Borics’ own profile has been on the rise, and while he’s not at star status, he’s now a recognizable name to MMA fans. “It’s crazy, because I don’t feel extra pressure. Or I don’t feel like I’m too excited,” he said of his new stature in the sport.

“This is what I’ve been waiting for. This is the right time for me,” he explained. “I’m 26 now, I train with the best guys in the world. I’m confident, because I really believe in my work.”

Borics isn’t worried about media attention or anything else as a result. “For me, it’s important just to fight. I want to win this fight, and that’s it. This is my job.”

That job, come Bellator 238 on Saturday, will involve a fight with former 135lb champ Darrion Caldwell, who moved up in weight for the grand prix.

“He’s a great wrestler, so he will try to take me down,” observed Borics, before adding that “if he takes me down, I don’t care. I’ve fought before against a good wrestler. People forget sometimes, I’m not just a striker. I’m an MMA fighter. I’m confident on the ground too. I’m ready for whatever.”

That includes going all five rounds. “I’m pretty sure my gas tank is much better than his, so I am ready.”

Watch our full Bellator 238 interview with Adam Borics above! 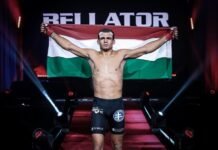 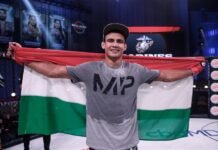