Claressa Shields versus Amanda Nunes has the potential to be the most high profile fight in the history of women’s combat sports. There is so much intrigue around the bout that Nunes vs. Shields betting odds have already been popping up. Intense curiosity is there whether it happens in the Boxing ring, MMA cage, or a contract is signed for two bouts within both disciplines. The figures below indicate odds-makers’ perception on how the story of this bout would unfurl in an MMA context.

Shields is just coming off of making history in the world of boxing. No one in the sweet science, male or female, have been able to capture championships in three separate weight classes quicker than Claressa Shields. She cemented her place in the history books with a lopsided unanimous decision victory over Ivana Habazin.

Shields has had some brushes with the MMA world in the past. Notably via her well-documented training sessions with Cris Cyborg. The elite Boxer has indicated a pronounced level of interest in crossing over though and even wants to make her MMA debut before the calendar year is done.

Amanda Nunes closed out 2019 with bantamweight title defenses over former 135lb titlist Holly Holm and the inaugural UFC women’s featherweight champion Germaine De Randamie. Shields was actually live in attendance for the GDR victory and did a variety of interviews and media scrums about a potential fight.

The UFC women’s bantamweight and featherweight champion, concurrently, seems to share a mutual curiosity with this huge crossover fight. Yet she’s downplayed the idea of doing it in the boxing ring. Will The Lioness and T-Rex stand toe-to-toe with each other this calendar year? Does Shields don the 4oz gloves? Does Nunes put on the big gloves? Do we get a two-fight contract with Boxing and MMA bouts agreed upon? Only time will tell. 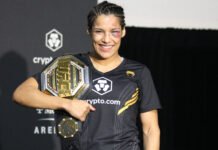