Violent Bob Ross will be looking to paint a bloody picture in Norfolk next month. The UFC has announced via social media that the popular lightweight, properly Luis Pena, will face Alex Munoz at the UFC Norfolk card.

The Fight Night event is headlined by a flyweight title fight between Joseph Benavidez and Deiveson Figueiredo.

Pena (7-2) has split a pair of fights since returning to lightweight, after a troubled debut at featherweight that saw the lanky fighter miss weight. Overall, the Ultimate Fighter 26 alum is 2-2 in the UFC, with wins over Matt Wiman and Steven ‘Ocho’ Peterson.

Alex Munoz (6-0) meanwhile remains an undefeated prospect. The Team Alpha Male fighter hit the radar screen when he defeated the popular Nick Newell on Dana White’s Contender Series. While he didn’t jump directly to the UFC, another win on the regional scene has earned him a spot on the roster. Pena will represent Munoz’s octagon debut when the pair clash next month. 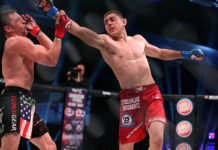 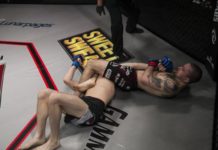