The only fight featuring the ladies at UFC Busan saw Amanda Lemos walk away with a first-round submission over American Miranda Granger.

Strawweights Miranda Granger and Amanda Lemos went early at UFC Busan, the second fight in on the South Korean card. Lemos had finished all of her wins, while Granger had finished all but one, her win over Hannah Goldy inside the octagon. Notably, Lemos was a new strawweight. She had previously competed at bantamweight.

Those stats turned out to be prophetic in the preliminary card battle. In a fight that wouldn’t make it out of the first round, Lemos managed to get Granger trapped up against the cage. From there, in a rather awkward spot, the Brazilian managed to lock in a rear-naked choke, while not actually having the back, or really being close to in position. Still, she managed to slowly force Granger down. And before you knew it, Miranda Granger was out!

Lemos, who was returning from a two-year suspension handed down by USADA, improved to 7-1-1 with her first win since 2016, outside the UFC.

Watch the finish in the clip below!

🇧🇷 Lemos gets the sub from a WILD angle at #UFCBusan!

The submission was one of just two stoppages on the preliminary card, and an early candidate for Performance of the Night. 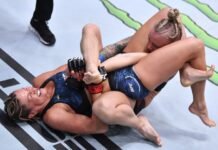 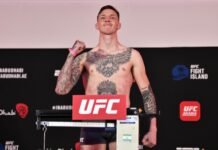