Alexandre Pantoja made a statement at UFC Busan, scoring a thunderous knockout of Matt Schenll in the opening round of their flyweight fight.

With the flyweight division potentially rejuvenated by Henry Cejudo dropping the flyweight title to allow for a Joseph Benavidez vs. Deiveson Figueiredo title fight, 125lb scraps suddenly had a lot more meaning to them. Such was the case with Alexandre Pantoja vs. Matt Schnell, which went down on the preliminary portion of the UFC Busan card in South Korea on Saturday.

The fight was especially notable because of the names involved. In his previous outing, Pantoja had lost a Fight of the Night effort to Figueiredo, and depending on how things played out in the title fight at UFC Norfolk, ‘The Cannibal’ could set himself up for a potential title fight with a big performance or two.

A big performance is exactly what Pantoja managed to pull off Saturday. While much of the western world was heading to bed, Pantoja ensured his fight against Schnell didn’t make it out of the opening frame. After some early action, a counter-right dropped Schnell. A few extra blows essentially added nothing. The ref made the save, but Schnell was out, legs twitching. A scary statement KO for Alexandre Pantoja, who might be just one win away from knocking at the door of a title shot depending on how things play out in early 2020. 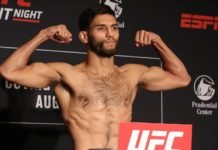 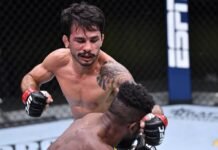