Reports of Diego Sanchez’s demise were greatly exaggerated. At least, reports of him parting ways with the UFC, which circulated earlier this year, were clearly premature. Sanchez (29-12), winner of The Ultimate Fighter 1, will face flashy Brazilian Michel Pereira (23-10, 2NC) at UFC Rio Rancho, the promotion announced Wednesday.

The news was revealed in a press release which also noted that the Fight Night event, confirmed to stream live on ESPN+, will have tickets on sale Friday, December 20.

For Sanchez, it’s a fight at home in New Mexico, his first in the state since 2014, when he defeated Ross Pearson at UFC Albuquerque. When he heads into Rio Rancho, however, he’ll be coming off a loss to Michael Chiesa, a loss that snapped a two-fight win streak for the original Ultimate Fighter winner. Sanchez had put together wins against Craig White and Mickey Gall. Overall, he’s 3-3 across his past six bouts.

Pereira, for his part, fell to 1-1 in the UFC in September in Vancouver, when he came up short against late-notice opponent Tristan Connelly. Pereira, known for his flashy, Capoeira-inspired style (despite reportedly only training briefly in the discipline), will look to have a better outing this time. A failed weight cut at UFC Vancouver didn’t help matters, but ultimately, he looked exhausted by the end of the three-round bout.

UFC Rio Rancho, numerically UFC Fight Night 167, will take place February 15, 2020 at the Santa Ana Star Center in Rio Rancho, New Mexico. The card is expected to feature Corey Anderson vs. Jan Blachowicz in the main event. That fight will be the pair’s second meeting. 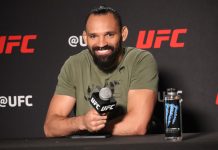 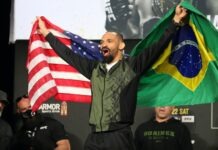 Santiago Ponzinibbio vs. Michel Pereira Set For May 21 UFC Event