Molly McCann will have the crowd behind her at UFC London when she takes on Ashlee Evans-Smith this March.

Next year’s UFC London card will once again feature England’s own Molly McCann. As first reported by Fighters Only reporter Jim Edwards, McCann (10-2) will take on Ashlee Evans-Smith (6-4) at the Fight Night event this March. The bout will be contested at flyweight.

McCann also appeared at the UFC’s 2019 trip to London. ‘Meatball’ picked up a win over Priscila Cachoeira that night, the first of her current three fight streak. She’s subsequently put together victories over Ariane Lipski and Diana Belbiţă. Overall, she’s 3-1 in the big show, after losing her promotional debut to Gillian Robertson.

Evans-Smith, meanwhile, was defeated by KGB Lee in her most recent trip to the octagon. That loss came at UFC on ESPN 1 in February, meaning it will have been over a year between contests for the former bantamweight. Consistency has been a killer for Evans-Smith, as she fought just once in both 2018 and 2019.

While a number of fights have been rumored for UFC London, including Robert Whittaker vs. Darren Till and Leon Edwards vs. Tyron Woodley, the UFC has yet to officially announce any bouts for the March event. Taking place at the O2 Arena, the card will go down March 21, 2020, airing on ESPN+. 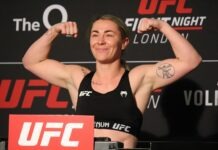 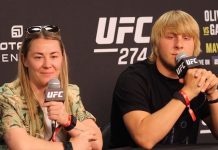