Now 3-1 in his past four fights, Albert Morales has added the LXF bantamweight title to his collection.

Burbank, CA — Albert Morales’ UFC run did not go the way he wanted it to. But the bantamweight, who has also competed for Bellator and BAMMA, has turned things around lately. Training with Team Black House, Morales was looking at a title shot over the weekend at LXF 4. And he made the most of it, defeating Ryan Lilley for the belt.

The doctor’s stoppage victory wasn’t the perfect ending, Morales told Cageside Press after the fight. But he’ll take it. “I know Ryan is a lion,” he said of his opponent, who is nicknamed just that. “You saw it in the fight, he did not give up, he kept pressing forward
He actually rocked me in the first round, but I was able to come back.”

“I was looking for the finish, I wanted to finish him, I felt it was coming,” Morales continued. “I felt fresh, I trained really, really hard for this camp and I always train to finish the fight.”

A cut by the eye ended Lilley’s night, however. “It’s kind of disappointing,” admitted Morales. “I like to finish people but you know what, we got the win, Team Black House got another belt, so I’m happy and I’m ready for the next one.”

The next one could be rather interesting. Morales has said that he expects to be done with the bantamweight division after one more fight. Given the nature of Friday’s stoppage, a rematch is feasible.

“That’s definitely up to LXF,” Morales told us. “I would fight Ryan back in a heartbeat. I know Anthony Birchak wanted a piece of that belt, so that’s a good one, we can go at it. Also we had a bantamweight fight earlier today, I’m not sure who won that fight, I was busy focusing on mine. But those guys are winning, so those guys want title shots too. Whoever wants it can get it, I’m ready for anybody.”

Watch our full post-fight interview with Albert Morales from LXF 4 above! 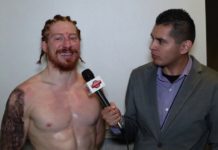 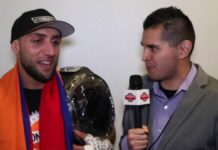 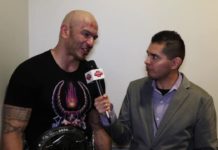