Spike Carlyle is looking to book a date with either ONE Championship or RIZIN following another big win at LXF 4.

Burbank, CA — ‘The Alpha Ginger’ Spike Carlyle pulled off a first round knockout at LXF 4. Improving to 8-1 as a pro and extending his win streak to four, Carlyle is hoping to use his success to push into Asia, to fight for RIZIN or ONE Championship in future.

Speaking to Cageside Press following his win over Jean-Paul Bosnoyan, Carlyle recapped the fight by saying that “The first round obviously was quick.” And while he had some adversity, “I was never rocked, I was never close to being finished.”

“He landed some shots,” Carlyle admitted, noting the crowd reaction to those blows, “but I had my mental fortitude strong. I didn’t feel nervous, I stayed calm.”

While his opponent came out more aggressive than expected, he added, the plan was “to kind of lure him into me, kind of make it a brawl. I have never met someone to beat me in a technical brawl, and I don’t think I will.”

As to the finish, which saw a few more punches land than many thought necessary, “I wish the ref stopped it, but he didn’t, so I had to go back and put an exclamation point on it.”

Spike is very much a showman, walking out as The Punisher at LXF 4. On that subject, he noted that “a lot of these guys come in with a very vicious, violent, or dark mentality. And they fight with their demons, I believe. Not only am I just a fighter or martial artist, I’m an entertainer. So when I go out there I like to put on a show from the moment the crowd sees me, to the finish.”

He hopes to take his entertaining style over to Asia soon. “My goal is to fight for ONE FC or RIZIN,” he said. “It’s been my dream since I was 15 to fight in Japan. I fell in love with Pride FC.” Hopefully, he’ll be out there foot stomping soon. And the walkouts will be there too. “I am a little bit of an Otaku, so I have some great, great, great things to break out over there.”

Watch our full post-fight interview with Spike Carlyle at LXF 4 above! 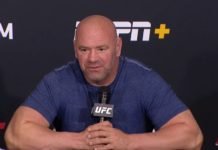 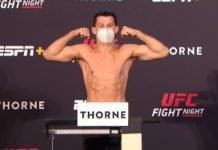 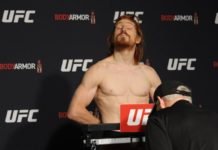