A date next month with Alistair Overeem is something Jairzinho Rozenstruik would certainly be open to following his UFC 244 spectacle.

New York, NY — Suriname’s Jairzinho Rozenstruik (9-0) had a thunderous knockout against legendary UFC heavyweight champ Andrei Arlovski at UFC 244. And if he gets his way, he’ll be fighting another legend shortly.

Following a 29-second win over Arlovski at Madison Square Garden on Saturday night, Rozenstruik said a fight with Alistair Overeem was an option. “That would be nice, if the fight’s still open,” he answered when the bout was suggested. And the December 5 date is enough time to prepare. “For sure.”

The slot against Overeem came open when Walt Harris was forced off the UFC Washington card in the wake of his stepdaughter’s disappearance. The big name fight talk arose after Rozenstruik won the biggest fight of his career against the ex-champ. Speaking to media outlets including Cageside Press following the fight, the heavyweight said simply “It feels great” when asked to describe the win.

A big factor in his performance, Rozenstruik said, was none other than UFC President Dana White, who gave a little post-fight speech. “I’m not going to say what he said, but he said a lot of things. That did something to me,” Rozenstruik explained. “I walked out with that mindset, I go in the octagon with that mindset, and I think that helped me to get this win, and so fast.”

Jairzinho, who has competed in the past for Japan’s RIZIN, said he didn’t believe anyone else could have motivated him that way. “I think it’s Dana White by himself. I’m watching the UFC for a long time now, and it’s the first time I saw Daan White,” he revealed.

“It was a moment for me to see him, to listen to what he said. And that he was giving that speech, I feel like it’s for me, because it did something to me,” he continued.

The win also represents something special for Rozenstruik’s homeland. “It means a lot to me and my team, and also the people in Suriname,” he explained. “I think I’m the first one who bring it so far from home. We are the smallest country in South America, and now we’re in Madison Square Garden.” Awesome. Crazy. Like living in a movie, he’d describe the feeling as.

As for his opponent, Rozenstruik doesn’t seem to harbor any ill feelings, despite Arlovski engaging in a bit of trash talk leading into the fight. “I think he was trying to get in my head. He’s a former champion, I’m growing up watching Andrei Arlovski, and I think he’s a great guy,” Rozenstruik said. “When he said those things, I was like ‘okay, you let your guard down.’ But I still like him.” 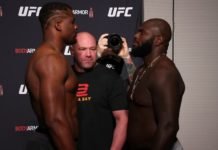 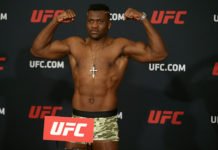 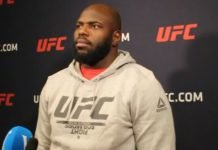