In the wake of his stepdaughter’s disappearance, Walt Harris has withdrawn from next month’s UFC on ESPN 7 card.

Amidst one of the worst possible scenarios any parent could face, UFC heavyweight Walt Harris has withdrawn from UFC on ESPN 7. The news comes as little shock, as Harris’ stepdaughter Aniah Blanchard has been missing for over a week in Alabama, where she attends Southern Union College.

Harris, along with UFC President Dana White and Alabama Governor Kay Ivey have all urged anyone with knowledge of the missing student’s whereabouts to come forward.

But with such a heavy shadow hanging over the family right now, it’s no doubt Harris found it nearly impossible to focus on training for his main event fight with Alistair Overeem.

MMA Junkie was first to report news that Harris had dropped out of the bout. The UFC has not officially commented on the matter, outside of White offering a reward of $25,000 for information regarding Blanchard’s whereabouts.

Harris’ scheduled opponent, Overeem, posted his own message of support Friday on his official Instagram account. “As a father, I can only imagine how devastating it must be when your daughter has gone missing,” Overeem wrote. “My thoughts go out to Walt Harris and his family.”

As a father I can only imagine how devastating it must be when your daughter has gone missing. My thoughts go out to Walt Harris and his family. 🙏🏽 #findaniah

UFC on ESPN 7 takes place December 5, 2019 at the Capital One Arena in Washington, D.C. 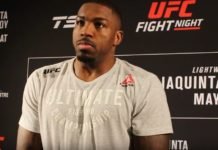