Dominick Reyes loves the match-up with Chris Weidman for his first main event at UFC Boston.

Boston, MA — Dominick Reyes is getting a legend for his first UFC main event. Chris Weidman, former UFC middleweight champion, is making his light heavyweight debut Friday night at UFC Boston. Reyes (11-0) gets to welcome him to the weight class.

Speaking at Wednesday’s media day ahead of the event, Reyes told reporters including Cageside Press that he feels “Chris is up there” when it comes to being one of the all-time greats. “He took out Anderson [Silva], Anderson at the time was the greatest of all time. Chris is at least top twenty somewhere.”

Which makes Weidman an impressive name for the resume, should Reyes get the win Friday. But ‘The Devastator’ is not just looking for a win. “My plan is to win emphatically. I want a finish. Like I’ve said before, my goal is to finish every fight. If I don’t finish, I feel like I’ve done a disservice to myself.”

A statement seems to be what Reyes is looking to make. But if God decides he needs another war rather than a finish, that’s fine too, he said. “Whatever the case may be, I’m only working my way up towards the title either way.”

He’s not worried about the Corey Andersons of the world, or any other potential challenger in the light heavyweight division. “Those guys are living their lives, I’m living my life. We’ll see what happens.”

What he is excited for, however, is being the main event. He’s looked comfortable during fight week, and told reporters Wednesday that “everything’s kind of aligned to lead to this moment.”

“I’m the main event,” he later added, joking that the distinction comes with “a nicer room.” One with a living room even.

For Reyes, “it’s huge. It’s a huge deal. I kind of came up, this is my first main event ever. Not just in the UFC.”

As a bonus, “I love the match-up,” he added. “The thing about Chris is, he’s a good guy outside of fighting too. It’s not like I’m fighting a scumbag. Which wouldn’t matter anyway, but it’s good to be fighting a good dude. So whatever happens, the better man will win.” 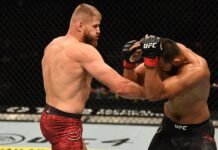