Combate Americas bantamweight champ Gustavo Lopez intends to defend his title at least once more before potentially exploring other options — including flyweight.

Gustavo Lopez is riding a three-fight win streak and is riding high off of his late August victory. Lopez defended his Combate Americas bantamweight title by getting past a familiar foe in even more impressive fashion. Joey Ruquet was submitted by Lopez in their first bout but the rematch resulted in a highlight-reel knockout that got some heavy circulation. The traction on social media exists on a microcosm level for Lopez as he continues to grow along with the macrocosm of Combate Americas.

Lopez had no shortage of top-level sparring partners ahead of his last title defense. He was preparing with Joseph Benavidez and was getting him ready for his own potential title fight. One of the all-time great lighter-weight fighters in MMA is readying for a projected Henry Cejudo rematch with Lopez helping sharpen the tools.

When Lopez discussed his sparring partners and the places he trains, he said “Right now it’s Joseph Benavidez. He’s been a really big help and my coach Tim Elliot”. Lopez continued, “Mostly staying at Xtreme Couture. But we go out to Tenth Planet and get some rolls in. Then I do some of my striking with my coach Jimmy Gifford up in Red Rock.”

Lately, Lopez has been talking to the kids in his hometown to inspire them. Wapato, Washington has showcased some of his motivational speakings and he seems to love the opportunity. It’s a chance to inspire the youth as a champion but also to pay it forward from all of those who helped him flourish on his come up. Notable names in the MMA sphere like Bryan Caraway and Miesha Tate played key roles for Lopez during the nascent days of his combat career.

“Coming up with Bryan and Miesha, they helped me a lot,” Lopez said. “The way Miesha did things kind of gave me a pattern to follow. You can see she was a great champion.”

Lopez was on cloud nine with how the Ruquet rematch ended up unfolding. Gustavo stated that “I don’t think it could have gone any better. I think he felt I was going to take him down, hurt him pretty bad, and then get the finish. But the fact I went out there and got a quick knockout, he didn’t get severely hurt, so I think it came out great for both of us.”

Lopez continued, adding “I felt like my team and I did everything we had to do to get ready. The gameplan was directly to take him down and kind of wear him out like we did last time. But he came in at the right time and the right place and just ended the fight there. It worked out great. I came out no injuries ready to do it again.”

After a successful bantamweight title defense, Lopez is starting to carve out a name for himself. With that comes bigger opportunities and more of a focus on creating a timeline for your future. For Lopez, this could manifest itself into switching weight classes.

“I’m not that big of a 35er so maybe 25 could be an option. We’re still negotiating with Combate,” he revealed. “We’re still on contract with them. So I’ll definitely be defending it one more time with them and then see what happens after that. I’m really happy with Combate, truly. I don’t have that much to complain about.”

Gustavo Lopez seems like he’s proud to represent Combat Americas as their champion. He seems stoked about continuing to grow in sync with Combate as it grows too.

Lopez quipped, “If they’re going to take care of me really well, I say why not? The company is still growing and getting bigger. They’re doing well with the whole media. Getting me out on ESPN. It’s nice to be riding the wave for sure.” 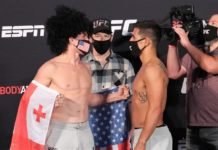 UFC on ESPN 10 Results: Merab Dvalishvili’s Pace Too Much for Gustavo Lopez 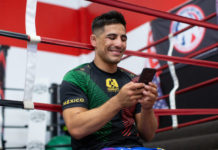 Finishing the Fight: UFC on ESPN 10 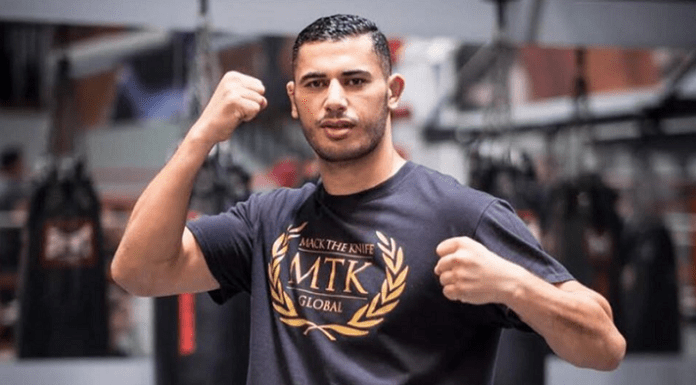