Bantamweight William Joplin, who appeared with Titan FC, Bellator MMA, and LFA among other promotions, has died as a result of pancreatic cancer, which he had been battling over a year.

Tragedy has struck the Bellator MMA family, and MMA community at large, for the second time in less than two weeks. News broke late Tuesday that Bellator fighter William Joplin had passed away, following a battle with pancreatic cancer. It comes shortly after another Bellator alumni, Katy Collins, died in late September after suffering a brain aneurysm.

It’s not the kind of fight anyone wants to find themselves in. Joplin’s diagnosis was grim from the outset. Pancreatic cancer is one of the most deadly forms of cancer (Jeopardy host Alex Trebek is currently fighting the disease), and in Joplin’s case, the disease had already spread to other organs. Still, he fought over a year, undergoing rounds of chemotherapy.

A GoFundMe page established to help with William Joplin’s medical costs confirmed the sad news. Sherry Joplin, William’s sister, wrote that “It hurts to inform everybody but William Joplin lost his fight with Pancreatic cancer this morning. We could still use your help paying for cremation expenses and a memorial service.”

Joplin (18-15, 1NC), a.k.a ‘The Armadillo,’ turned pro back in 2010, after a brief amateur stint that included a bout against future UFC fighter Kevin Aguilar. After a rocky start saw him go 2-8 out of the gate, he battled back, bringing his record to an even .500 at 8-8 by 2014. Appearances for RFA, Titan FC, Shamrock FC, and others would follow. As would shots in bigger promotions including LFA and Bellator MMA. The latter saw Joplin face off against future title challenger Juan Archuleta at Bellator 195 in March 2018. It was his only loss in his final five fights, as Joplin went 3-1, 1NC in that span — with the no contest coming as a result of lightning.

Incredibly, while Joplin wrapped up his MMA career in 2018, he continued to train and compete, becoming the first 160lb Combat Jiu-jitsu champion in the state of Kansas at UCL’s Battle of the Titans II this past July.

Universal Combat League released a statement on Joplin’s passing via their official Facebook page. “A warrior was lost today….. With a heavy heart we we’re honored to have hosted this champion in his final appearance in the cage. Rest in peace William you lived your life like you fought in the cage. With courage and strength. One of the toughest men ever. RIP William The Armadillo Joplin.”

Tragically, Joplin’s mother Janet passed away from pancreatic cancer as well, just eight months prior to her son’s diagnosis in August 2018, weeks after his final MMA bout.

A native of Kansas City, Missouri, Joplin was a popular figure among fellow fighters and teammates, many of whom responded to his passing Tuesday. The bantamweight trained with the likes of James Krause, Zak Cummings, Tim Elliot and others at Glory MMA & Fitness in Lee’s Summit, Missouri.

Joplin, whose birthday fell on September 18, was 41-years old. Our deepest condolences go out to Joplin’s friends and family. 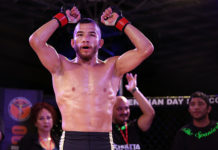 Bellator 195 Results: Juan Archuleta Too Much to Handle for William Joplin