Lightweight Mike Davis will have just a few days to make weight and plan for a scrap with Thomas Gifford at UFC Tampa.

On just four days notice, Mike Davis has joined the UFC Tampa card. ESPN was first to report that Davis will replace Contender Series alum Brok Weaver at the event, which takes place this coming Saturday. No reason has been made public regarding Weaver’s withdrawal, but it left the promotion in a pinch to say the least.

Enter Davis (7-2), who fights out of nearby Orlando, FL. He made his promotional debut earlier this year against Gilbert Burns, losing via second-round rear-naked choke to the Brazilian. With just days to prep for the lightweight contest against Gifford — not to mention make weight — Davis will look to turn things around.

Prior to his octagon debut, Davis had put together a two-fight win streak. His only other loss as a pro, outside the Burns defeat, came to Sodiq Yusuff, now a rising star with the organization.

Gifford, like Davis, suffered defeat in his UFC debut earlier this year. Now 27-years old, the 17-8 lightweight ran up five wins and a no contest prior to jumping to the big show. However, at UFC Fort Lauderdale, he dropped a unanimous decision against Roosevelt Roberts. 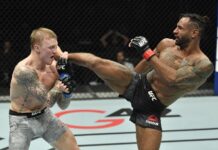