Cris Cyborg finally has a division she can call home, and Julia Budd gets to prove she’s a legitimate threat as the pair are set to collide in January.

Los Angeles, CA — While the news had already slipped out, Bellator MMA had a big announcement to make Saturday night in Los Angeles. During the Bellator 228 broadcast on DAZN, the promotion announced that newly signed featherweight Cris Cyborg would challenge Julia Budd for the women’s 145lb title in January.

The fight would take place at the very same venue as Saturday’s event, The Forum. It was, frankly, the biggest fight for Cyborg anywhere, outside of a rematch with Amanda Nunes in the UFC.

Once upon a time, the pair came close to fighting in Invicta FC. The bout never materialized, however. Asked if this booking was perfect timing in the end, both ladies agreed.

“I think so,” answered Budd, speaking to reporters including Cageside Press at the Bellator 228 press conference.

“I think you know we’re real 145lbers and I’m really happy to fight in my division,” added Cyborg. The option to fight in her natural weight class — the UFC chose not to build a division around her at 145lbs when she competed for them — has long been a desire for the Brazilian.

Plenty of questions were fired Cyborg’s way Saturday night. Would she be interested in fighting in Japan, given Bellator cross-promotes with RIZIN? “First thing, my focus is my next fight with Julia Budd. If I have the opportunity, for sure, it’s going to be welcome.”

How does she expect the transition from the UFC to Bellator to go? “I’m really happy I work with Scott before, in Strikeforce. We had fun together, we did history together,” she reminded those in attendance. “They really appreciate working with me, and have my full division.”

“I just really feel very blessed to be here, and it’s a great opportunity for me,” she added. Asked whether any fights besides Budd were offered to her, Cyborg said that “I never choose my opponent, I just wait and keep training.” So no boxing then? “Just mixed martial arts for now,” she confirmed.

Budd is already being overlooked, it seems, with many suggesting Cyborg is the “true” champ, despite her loss to Nunes in the UFC. Budd’s own successes in Bellator are being overlooked as well. It’s not lost on her.

“I’m the four-time Bellator world champion, so I think they should definitely look at me as the champion coming in,” Budd suggested. “But obviously I think this is the fight that, going back to her being offered other fights, was the one that made the most sense.”

“I said that back after my fight in July. That I thought this fight should happen first,” she continued. “I didn’t think she should have to fight anybody in the division before we fight each other.”

At least now, Budd has a chance to silence detractors who relied on Cyborg’s absence from Bellator to diminish her own accomplishments. “It definitely feels like that,” said Budd. “I think we’ve both known of each other for the last ten years that I’ve been in MMA. We’ve known of each other, because we’re the two best girls at 145.”

“This is a dream fight for me,” she finished. 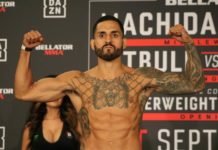 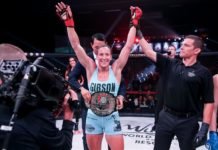 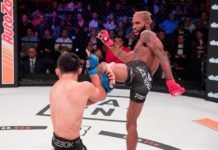