After a five year absence, and pushing fifty, Antonio McKee got back in the cage, and the win column, at Bellator 228.

Los Angeles, CA — Welcome back, Antonio McKee. Whether the lightweight trailblazer fights again or not, he made Bellator 228 in Los Angeles on Saturday a memorable night.

Earning a second round TKO against William Sriyapai, McKee made a bit of history, as part of the first father-son duo to fight on the same card for a major North American promotion. Improving his record to 30-6-2 in the process, it was McKee’s first action in roughly five years. He’d then switch hats and corner son A.J. later in the night, as the younger McKee also picked up a big win.

After his own fight, Antonio McKee addressed the media, including Cageside Press, to reflect on the fight, and what comes next.

“There’s nothing like being in there. It’s a different feeling. I think I forgot that feeling,” he said of the fight itself. Motivation, he added, came both from within, and from those around him.

“It’s mental,” he continued. “And the more and more I said that to myself, the more I started to see, the more chances I decided to take. You never see me throw spin kicks and head kicks, but I started to feel comfortable, feel like I was home.”

McKee saw the fight as a win-win situation, one that he could use to motivate son A.J. later in the night, win or lose. Whether or not it really played a roll, A.J. absolutely flattened Georgi Karakhanyan in the featherweight grand prix, an eight-second knockout that clocked in as the second-fastest in Bellator history.

Asked about the overall fight week experience this past week, McKee answered by saying that “Bellator is amazing. They’ve done an amazing job. They build talent, without a doubt. Everyone knows most of the UFC stars started with Scott Coker.” Coker, of course, ran Strikeforce, where current UFC stars Daniel Cormier, Luke Rockhold, Jacare Souza, and Alistair Overeem plied their trade. “His attitude, just the whole organization is just amazing. I wouldn’t tell anybody to go anywhere else.”

That includes, apparently, his son. “We were offered a little money to leave Bellator, and I said ‘absolutely not. We’re going to stay right here. This is home,'” revealed McKee. “Money is not always the way to go. Sometimes you’ve got to have a little loyalty.”

The burning question, of course, is whether McKee will fight again. “I don’t think I’m done. That was just a bit of it,” the 49-year old answered. Fighters have competed in their fifties, including Ken Shamrock, also in Bellator,

“With a little bit more preparation, I would love to do this again,” McKee continued. “It just felt so real. To be at this age and be this healthy naturally, no PEDs, no steroids, none of that crap — I just want to be a trend setter for a lot of these young kids, so they can say ‘you know what, I don’t need it. If McKee can do it at 50, 49 years old, I can do it too.’ You’ve just got to train right.”

So as long as the body holds up, Antonio McKee will keep going. And it doesn’t matter where. As to whether he wants to compete on the same card as son A.J. again, McKee didn’t seem to keen. “No, no. Because I want to get in there,” he answered.

“At 155lbs, guys are just faster. But as far as skill set and knowing where they’re at, I’ve got a lot of edge over those guys,” said McKee. “So you know what, I might tell Scott ‘give me some of them lions you’ve got in the cage that’s hungry.’ Because I’ve always got the option to say ‘hey, this is too much, let me out!’ I don’t have anything to prove. This is the best time to fight, when you’re happy with everything, life is good.”

One thing that wasn’t good, in McKee’s opinion, was the California State Athletic Commission. In particular, their rules regarding docking fighters who missed weight — as McKee’s opponent William Sriyapai did at Bellator 228.

“As a matter of fact, I’m going to go give William back his 10%, that they took for not making the weight,” McKee promised. “Listen, I don’t think that’s right, the commission gets ten. You can award me ten, but I’ll take my ten and give it back to him.”

McKee takes issue with the governing body keeping their share, given their health and well-being isn’t at risk. “I just don’t think that it’s right that the athletic commission should take 10% when the fighters are the ones out there fighting. The fighters should get 20%, not 10 to the commission, 10 to the fighter. Why? Why are you taking 10% off two guys that worked their asses off? So I’m going to go give him his 10% back. And let it be known. Yeah, I gave it back to him. Cash. Chi-ching.” 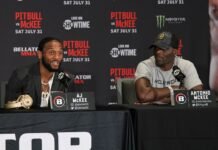 Bellator 263: Antonio McKee On Son A.J. Being His Revenge in MMA 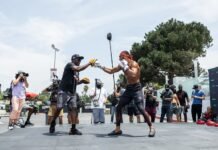