Scott Askham will get his wish and fight Mamed Khalidov at KSW 52, while a month earlier, strongman Mariusz Pudzianowski fights fitness model Erko Jun at KSW 51.

A couple of big fights were announced by Poland’s KSW during their historic 50th show in London on Saturday. The first will see heavyweight and former strongman Mariusz Pudzianowski face Erko Jun at KSW 51, which will mark the promotion’s debut in Zagreb, Croatia. The second will see former middleweight champ Mamed Khalidov come out of retirement to face off with middleweight champion Scott Askham, in a catchweight fight at KSW 52.

The Khalidov fight is one Askham has been seeking for a while. In fact, he told Cageside Press prior to his title fight win at KSW 49 that he was hoping to lure Khalidov out of retirement. Well, mission accomplished.

Back in June, he was arrested in Poland and linked to stolen vehicles, but it appears he’s free to compete. KSW 52 takes place December 7 in Gwlice, Poland.

KSW 51, meanwhile, gets a potential slugfest when heavyweights Mariusz Pudzianowski and Erko Jun collide. ‘Pudzian’ will be looking to bounce back after losing two straight. Overall, the strongman is 12-7, 1NC as a pro. Prior to this skid, he had won three straight. The hulking Polish Fighter previously won five World’s Strongest Man titles.

Erko Jun (3-0) has made the most of his MMA crossover, coming from the world of fitness modelling and bodybuilding. He’s finished all three of his fights, all of which have come under the KSW banner. 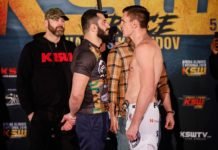