If Augusto Sakai gets his way, he’ll be fighting again in under two months’ time in Sao Paulo, after winning big at UFC Vancouver.

Vancouver was treated to the former, as Sakai landed a knockout punch on Tybura just under a minute into the fight. The former Bellator heavyweight and Contender Series alum improved to 14-1-1, and now has three straight wins in the UFC.

Not a bad start. Speaking to reporters including Cageside Press after the fight, Sakai revealed that he was banking on an early finish. “I expected that I was going to end it in the first round. I didn’t expect it was going to be that quick, but I’m very happy that I ended it very quickly,” he said via translator.

The heavyweight division may have slept on him so far, but they’d better take notice. “They all need to be aware of me,” said Sakai. While his last fight, against Andrei Arlovski, “was by points, this time I was able to finish by knockout. That’s what I’m out for.”

Sakai wasn’t about to call his shot Saturday, backstage at the Rogers Arena. “I have no names. Whatever the UFC wants, I’ll be ready,” he said. A ranked opponent is appealing though. “Of course if [it was] someone in the rankings, that would be amazing, but whoever the UFC wants, I’m ready.”

Later on, he’d add that at 28 years old, quite young for heavyweight, “I’m in no rush. I’ve been training for a long time. Step-by-step, and I know my time will come.”

One thing that definitely has his attention, however, is fighting at home. Asked by Cageside Press if he wanted on the UFC Sao Paulo card in November, Sakai perked right up. “Yes. I very [much want] to fight in Sao Paulo!” he answered, ditching his translator and speaking in English.

He did that again, moments later, when asked about his experience in Canada. “I love Canada!” he exclaimed. “I feel like I’m home. Canadians are amazing. I feel very welcome here.” 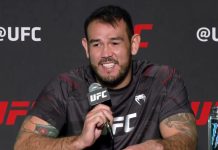