Former KSW champion Mamed Khalidov has been arrested by Anti-Terrorism Police in Poland, following an investigation into the import of stolen luxury cars.

At one time, Mamed Khalidov was considered one of the best fighters not signed by the UFC. In a lengthy career that began in 2004, Khalidov captured the KSW light heavyweight championship, and later the promotion’s middleweight title, in separate reigns atop the two weight classes. However, the Chechen-born Pole, who lives in and fights out of Olsztyn, Poland, was arrested there Tuesday by Polish Anti-Terrorism Police, on charges of illegally importing stolen vehicles.

Multiple media outlets in and out of the country reported the news.

In a statement, the National Public Prosecutor’s office said:

“On the orders of the prosecutor of the Silesian Branch Office of the Department for Organized Crime and Corruption of the National Prosecutor’s Office in Katowice, officers detained Mamed K. on the luxury car pickup.

“In the course of the proceedings, the prosecutor of the Silesian Branch Office of the Department for Organized Crime and Corruption of the National Prosecutor’s Office in Katowice determined that the vehicles were purchased in the Czech Republic. Among the luxury cars, there were such vehicles as Porsche Panamera, Range Rover Evoque, BMW M6, BMW 7 series.”

The involvement of anti-terrorism police may raise some eyebrows. No reason was given for their involvement. 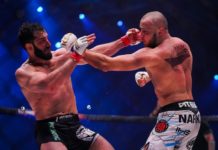 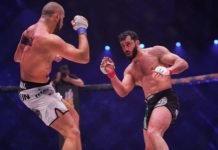