KSW have made official a few more big fights for their monumental KSW 50 card later this year.

As for Kincl, the 30-year old from the Czech Republic is 12-4 since 2010, and will enter the title fight with Soldic on a three-fight win streak.

Lightweights Norman Parke (27-6-1) and Marcin Wrzosek (14-5), meanwhile, meet in an interim title  clash. Parke has fought for gold in KSW before, but his last attempt came up short due to injury. Since then, he’s won four straight, including victories against former KSW welterweight champion Borys Mankowski and ex-featherweight champion Artur Sowinski.

In other action, Dricus Du Plessis (12-2), a former welterweight champ known for his battles with Soldic, will return to face Joilton Santos (30-7) at KSW 50. And in the women’s strawweight division, Aleksandra Rola (2-0) will meet Catherine Costigan (6-2). Ireland’s Costigan has competed for the likes of Invicta FC and BAMMA, but has not been in the cage since 2017. 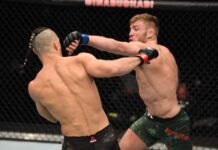