WXC 81: Warrior Wednesday 6 was live on Wednesday, August 28, 2019 from Southgate, Michigan. The live results are below.

Warrior Xtreme Cagefighting returned on Wednesday night for WXC 81: Warrior Wednesday 6. The event was live from the Crystal Gardens in Southgate, Michigan and was broadcast live on UFC Fight Pass.

In the main event, Pipe Vargas (7-1) faces Jose Johnson (9-5) for the WXC bantamweight title. Vargas is a former Combate and Titan FC competitor who trains out of American Top Team. The 25-year-old made his WXC debut in February, when he knocked out Saidyokub Kakharamonov with a flying knee. Johnson is a MMA veteran at just age 24, having had 37 amateur contests and 14 professional contests within the last six years. Since making his WXC debut last year, Johnson has gone 3-0 in WXC, with all of his wins coming via first-round knockout. He has finished six of his nine professional victories, four via knockout and two via submission.

In the co-main event, flyweight veterans collide as Jesse Bazzi (10-6) faces Josh Smith (8-5). Bazzi last competed in Bellator back in May when he defeated Joey Diehl. Bazzi is a former WXC flyweight title challenger and last competed in WXC in November of 2017, when he lost to Eric Ramirez via Guillotine Choke. Smith will be making his third Warrior Wednesday appearance, and will be looking for his third straight finish. The American Top Team member most recently finished Shawn Mack via first-round TKO at WXC 78: Warrior Wednesday 3.

Also on the card, Michigan prospect Taylor Moore (9-4) is back in action after eleven months away, when he faces 24-fight veteran Josh Robinson (12-12). 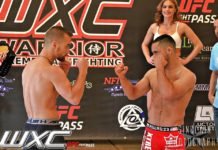