Michigan-based promotion WXC returns for their 78th event with the promotion’s third edition of Warrior Wednesday. The live results are below.

Michigan-based promotion Warrior Xtreme Cagefighting returned for their 78th event on Wednesday as WXC 78 displayed the third edition of Warrior Wednesday, live from the Crystal Gardens in Southgate, Michigan.

In the main event, UFC veteran Bobby Nash makes his return to the WXC cage after competing three times inside the premier MMA organization, the UFC. The 29-year-old Michigan native went 0-3 inside the Octagon, losing to Englishman Danny Roberts and China’s Li Jingliang and Song Kenan. Under the WXC banner, Nash is 1-1, winning his professional debut back at WXC 52 in Michigan, and with his only regional loss coming six months later for the same promotion. Nash, faces 26-fight veteran Mark Stoddard, who’s a two-time Bellator competitor. Stoddard has won his last six bouts, with all wins coming via finish in the first or second round.

In the co-main event, Xtreme Couture’s Justin Jaynes faces short-notice replacement and 37-fight veteran James Warfield-Lane. Jaynes, 29, has won three straight, including two wins inside the WXC cage. The one-time Bellator competitor, Jaynes, has won eight of his last nine contests, with the only loss coming to fellow prospect Tommy Aaron. Meanwhile, 41-year-old Warfield-Lane looks to bounce back after suffering a first-round submission loss to Dakota Cochrane at Road to M-1 USA 2 last April. Warfield-Lane replaces Austin Tweedy after Tweedy was forced to withdraw due to injury. Warfield-Lane has faced tough competition throughout his career with Joe Ellenberger, Luis Palomino, Seth Baczynski and Yves Edwards being among them.

Also on the card, undefeated flyweight prospect, Juancamilo Ronderos looks to build on recent momentum in the WXC cage.

The event is broadcast live and exclusively on UFC Fight Pass. 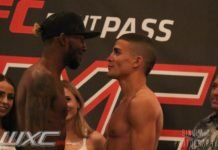