Bridgeport, CT — If there were any questions about Vitaly Minkaov following his February loss to Cheick Kongo, they were answered Saturday night at Bellator 225.

Minakov (22–1) took no time whatsoever in finishing off extremely short notice replacement Timothy Johnson in Bridgeport. The former UFC heavyweight was filling in for Javy Ayala, and found himself outmatched by the Russian. A kick to the body, a punishing jab, and some follow-up strikes, and Minakov had a first round finish.

So will the real Vitaly Minakov please stand up? After years away from the promotion, the former heavyweight champ returned at Bellator 216, only to drop a unanimous decision to Kongo, who he had defeated years earlier. In their rematch, Minakov looked tired. Rusty. Nothing like the fighter who showed up against Johnson.

“The issue is that before the Kongo fight, I got [an infection]. I was in hospital for one week, I lost like 10lbs in six days,” Minakov told reporters backstage, including Cageside Press. “Five days before the fight, I just get out from the hospital, so I was in bad condition, so that’s why in the fight, I lost.”

In comparison, “this camp went well. I prepare myself for a couple months, everything was great.”

Oddly enough, the one factor many thought could throw a wrench in the works for Minakov worked out in his favor. “It’s the second time that my opponent changed. Originally it was supposed to be Roy Nelson, then it switched to Javy Ayala,” he said.

As for getting the Ayala and even Nelson fights back, Minakov was indifferent. “Doesn’t really matter, I don’t care. Whoever Bellator put in front of me, I will fight him. But the most important thing for me is to get the title shot as soon as possible.”

As for when a shot at his former belt might come, “it’s up to the Bellator organization,” the heavyweight answered, “but I feel like a couple more fights will put me in the title shot.”

In the meantime, there’s no cause for celebration just yet, said Vitaly Minakov. “I wasn’t really upset after the Kongo fight. It is what it is. For now I’m not going to celebrate anything, because it’s just a regular fight. It’s another step to get the title. I will celebrate when I get the title.” 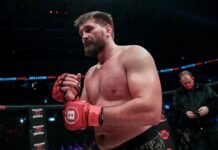 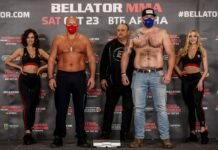 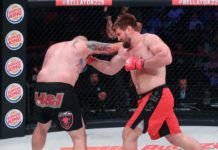