A man of few words, Sergei Kharitonov has just one goal in mind following his Bellator 225 win over Matt Mitrione: a title fight.

Bridgeport, CT — Sergei Kharitonov got his revenge on Saturday. While his relationship with Matt Mitrione has appeared to remain affable despite ‘Meathead’ ending their first fight in seconds due to a low blow, the Russian veteran was no doubt looking to make a statement Saturday at Bellator 225. There, the pair met for the second time in 2019.

Kharitonov made his statement Saturday, finishing Mitrione in the main event, partway through the second round. It was a bizarre fight that saw Mitrione continually lose an ill-fitting mouthpiece. Eventually, he fell victim to one of Kharitonov’s attacks, punctuated with a knee and some heavy punches.

Bellator CEO Scott Coker had hinted the fight could have title picture implications heading in. That is all Kharitonov seemed focused on following the win. Speaking to reporters including Cageside Press backstage, Kharitonov was asked if he would prefer a rematch with Javy Ayala, who knocked him out a few years back, or a fight with legendary countryman Fedor Emilianenko.

“He wants the title fight,” his translator answered. So neither, then. The belt is held by Ryan Bader, who will defend the title against Cheick Kongo next month.

Mitrone’s mouthpiece was continually falling out throughout the fight, to the point that the referee warned him he’d lose a point should it happen again. It wasn’t something that annoyed Kharitonov, however. “No, nothing was frustrating me,” he said. “Everything went as planned. The only thing was, I planned to have the fight continue three rounds. But what happened happened.”

The fight appeared to shift when Kharitonov began targeting the body. It seemed like that might have been part of the game plan, and Kharitonov confirmed it was. “Yes, this was the plan,” he revealed. “Together with my coach, we planned to hit him in the body, that’s what I was training for.”

There was no apprehension about another low blow, despite Mitrione landing a number of kicks early, said Kharitonov. “No, No. Everything is fair. It’s a sport.”

As for Bader vs. Kongo, the hulking heavyweight has “no predictions, but if someone drops out, I’m ready to step in.”

After years spent kickboxing, boxing, and as a mixed martial artist, some have suggested that Kharitonov is a much improved fighter from the one who competed in PRIDE over a decade ago. Kharitonov, however, isn’t giving that much though.

“I was a kickboxer, boxer, but the only thing that interests me the most right now is a title fight,” he said. “That’s what motivates me.” 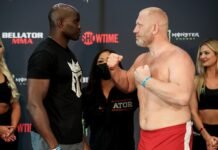 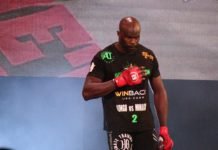 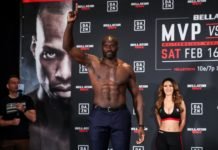