The UFC’s annual November trip to Madison Square Garden is a date that MMA fans circle on their calendars each year. Given the promotion’s busy schedule, which title-holders are available to potentially defend their belt in the main event of UFC 244?

We’ve seen the likes of Conor McGregor, Georges St. Pierre, and Daniel Cormier headline the UFC’s Madison Square Garden extravaganza over the past few years. The promotion always does their best to bring top-tier title fights on their yearly trip to New York City.

Last year was the first trip in three years that the early November event didn’t feature three UFC title fights. While the number of title-fights on this year’s event remains to be seen, we’re starting to get an idea of who could feature atop the card.

We’ve already had a few bouts announced for UFC 244. Corey Anderson and Johnny Walker will battle for a spot in the light heavyweight title-picture. Katlyn Chookagian and Jennifer Maia will be doing the same, fighting to be next in line to face women’s flyweight champion Valentina Shevchenko. And Derrick Lewis will be looking to snap his two-fight losing skid against Blagoy Ivanov, who has already won two fights in 2019. Darren Till might be showing up as well.

Those are all fun match-ups with fairly high stakes. But, given the high-profile title fights happening shortly before UFC 244, and UFC 245 taking place in mid-December, what champions could the promotion call upon to main event their annual trip to Madison Square Garden this fall?

We’ve already been treated to a couple of title fights this month, with another on the way. Fighting a couple of months later wouldn’t be the craziest thing, but it’s still a relatively quick turnaround. That’s why we don’t expect Valentina Shevchenko, Stipe Miocic, or either of Jessica Andrade or Weili Zhang, to feature in the main event of UFC 244.

The same can be said about the fighters in pay-per-view main events taking place ahead of UFC 244. Khabib Nurmagomedov and Dustin Poirier will be fighting for the lightweight title at UFC 242 next month. They’ll be followed by Robert Whittaker defending his belt against Israel Adesanya at UFC 243 in October.

Again, quicker turnarounds have happened. And they’re probably more likely with a fight at MSG on the table. But, given the other options available, having to convince any of those champions to make a relatively quick return to the Octagon to defend their belts doesn’t seem like the road the promotion will go down.

Bantamweight and featherweight champion Amanda Nunes will be busy as well. She’ll be fighting Germaine de Randamie for the second time at UFC 245, as GDR looks to become a two-division champion and add a bantamweight title to her collection. The duo previously fought in November of 2013, with Nunes getting a first round TKO victory.

It’s unclear whether or not Nunes-de Randamie will be the main event of December’s pay-per-view. If not, one of the currently available fights for UFC 244 will be taken or saved for that card.

Light heavyweight champion Jon Jones has already brought up the idea of fighting at Madison Square Garden this fall. He’s been keeping busy, fighting three times in a little more than six months throughout 2019 (mostly).

The bigger question for Jones is who he could fight at UFC 244. A rematch with Thiago Santos sounds fun, but he’s on the shelf for several more months. Jan Blachowicz is an interesting option. He’s coming off of an impressive dismantling of Luke Rockhold earlier this summer. Blachowicz is 5-1 in his last six fights, with the lone loss coming to Santos in February. Dominick Reyes and Corey Anderson have been mentioning Jones lately as well. But, they’re both busy. Reyes is fighting Chris Weidman in Boston this fall, while Anderson is matched up with Johnny Walker at UFC 244 already

So, it looks like it’s Blachowicz or bust for the champ. Of course, talk of a trilogy fight with Daniel Cormier will always arise. Following Cormier’s loss to Miocic at UFC 241, and the talk of retirement that was surrounding the build-up to the heavyweight title fight, it’s hard to imagine Cormier getting back in the Octagon so quickly after getting knocked out, cutting a bunch of weight, and accepting a trilogy bout with Jones in November. A champion-versus-champion bout with Miocic sounds interesting too, but we’ll have to wait and see what the new-ish heavyweight champ has in mind for his next title-defense.

The promotion could also look to the welterweight division for their MSG main event, depending on when Kamaru Usman is 100%. His match-up with Colby Covington is one of the most anticipated title fights in recent history. Usman will make sure he’s completely healthy before he signs up for his first title defense, especially after Covington’s recent mauling of Robbie Lawler. Whether it’s adding depth to UFC 244, or potentially featuring at UFC 245, this match-up will add a lot of intrigue to whichever card it’s on.

Next up, we look to a lower weight class to top the MSG card. 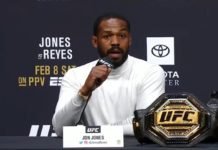