Gerald Meerschaert showed off his grappling prowess in a tough fight at UFC Newark, choking out Trevin Giles in the final round.

Grapplers Gerald Meerschaert and Trevin Giles crossed paths at UFC Newark, both looking to get back in the win column.

Trevin Giles landed a heavy right hand early, then caught a knee and took the grappler in Gerald Meerschaert down. Giles was in side control, but wasn’t safe, as he got caught in an arm triangle sweep right into full mount. Meerschaert locked up mount, but was swept after about a minute of top control into guard. Giles thwarted a sweep attempt from Meerschaert, which allowed him to take his back, then side control. Giles kept the pressure on Meerschaert, countering another sweep with an anaconda choke attempt, then landed a few punches to end the round.

Meerschaert was caught with a head kick to start the second round, then worked the fight to the ground. Giles got to side control, then back control, then mount. From mount, Meerschaert was able to sweep Giles to full guard. The fight came to a bit of a stalemate with Meerschaert in to position. A few punches landed for Meerschaert, as he controlled the latter half of the round.

Cageside Press scored the round 10-10

Gerald Meerschaert def. Trevin Giles by Submission (Guillotine) in Round 3 (1:49) 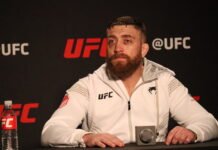 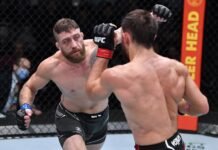