Colby Covington, Robbie Lawler, and the rest of the UFC Newark card were set to hit the scales at 9AM Friday, for the day’s official weigh-in.

There was but one weigh-in for UFC Newark (UFC on ESPN 5) Friday, and that was the official, and only, weigh-in. Taking place at the host hotel in Newark, all fighters were set to hit the scales, followed by a brief face-off. It was the last look for MMA fans at the athletes before Saturday’s show.

Whether the early start time changed anything in terms of in-cage performance remained to be seen, but the weigh-in was set to go down at the usual time, 9AM (local time, ET). Cageside Press will be on-hand, so check back for live updates throughout the morning!

As the weigh in kicked off Friday morning, in a sweltering room at the UFC’s host hotel, a number of fighters required the towel, including Joaquim Silva, Nasret Haqparast, and Cole Williams. Colby Covington hit the scales early, while opponent Robbie Lawler stepped on about the one hour mark. With both men making weight, the main event was official. No pose from Lawler, who was all business on the scale, facing forward with zero emotion.

Two fighters missed weight Friday, including the very last to hit the scales, as Dong Hyun Ma weighed in at 158lbs for his lightweight fight with Scott Holtzman. There was no second attempt to make weight. Ma will be fined 20% of his purse. Cole Williams also missed the welterweight limit, and was fined 30%.

* Dong Hyun Ma misses lightweight limit, will be fined 20% of his purse.

** Cole Williams also misses weight, will forfeit 30% of his purse 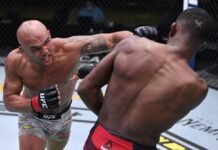 Bellator 249: Jaleel Willis Knew Years Ago It Would be Bellator, Not the UFC,...