Bellator President Scott Coker spoke to media in Los Angeles recently, and discussed the procedure for the upcoming featherweight tournament as well as his plans for Ryan Bader and Kyoji Horiguchi.

Los Angeles, CA — Scott Coker revealed some big plans for the remainder of 2019 for Bellator. The 16-man featherweight tournament and its first-round matchups were officially announced, as well as a slew of main event announcements including Ryan Bader vs. Cheick Kongo for the heavyweight title.

“The heavyweights, you always worry that somebody’s going to get hurt. The welterweights, Rory was a little bit injured, he needed another 30 days of rest, which we gave him, so he’s ready to go. That fight will happen at the end of October, [Douglas Lima] and Rory will get it on up in Mohegan Sun.”

A high-profile fight between champion Patricio Pitbull and top contender Juan Archuleta will surprisingly take place in the first round of the tournament. Coker discussed how it came together.

“Pitbull said he’ll fight anybody. Juan actually called us through his management, who said ‘Juan wants to fight Pitbull.’ So that was the challenge. Strategically, I think it’s a good move. You’ve got to fight him sooner or later, if he’s going to win the tournament. And you want to fight for the belt, you want to be the champ, and he’s 100% healthy coming off a big fight in Madison Square Garden. So I think that it was a good move for him. And once that fight was set, we set the rest of the tournament.”

Coker also touched on how the tournament is going to work, since there is no “bracket” per se.

“The 16 fights will happen, then is going to be the pairings. The pairings will be a whole different thing. When the 16 fights happen, there’s going to be a random drawing show. It’s going to be the evening of the fight, or the Monday after at Viacom here in Hollywood. But it’s going to be a show that’s basically, the fighters will pick who they end up fighting. We usually have an eight-man scenario, this is a sixteen man scenario. So we thought, how do we get to the eight man? I think in the future, all our tournaments will have this random-type drawing. If you’ve been around martial arts a long time, you’ve seen the drawings for K-1, or the drawings for Japan, this is a playbook right out of Japan. Basicaly what it is, we’ll have eight slots against the wall, we’ll have eight fighters sitting in a chair, they’ll all go pick an egg, crack it open, it’ll have a number on it. I’m number one, I get to pick any slot. The difference is going to be, now I’ll know where I’m fighting. Fighters will know the time and the place, but at least the first few picks likely won’t know who they’re fighting.

After winning the bantamweight title at Bellator 222, Kyoji Horiguchi is set to split time between RIZIN and Bellator.

“Horiguchi, he might be fighting here sooner than you think. He’ll definitely be fighting New Year’s in Japan. But I think after that, [Nobuyuki] Sakakibara said he’s welcome to come over here and fight. We’ll get him in there hopefully before the summertime.”

Another man who will be splitting time for Bellator will be double-champion Ryan Bader. He’s set to defend his heavyweight belt in December, but will not have much time to rest after if Coker gets his wish.

“I talked to Ryan today, and I said ‘Ryan, you know, you’re defending the heavyweight belt, but how soon can you turn it around for 205?’ Because we might ask you before the end of the year to fight at 205. So we’re going to keep him very busy.”

Check out the rest of Scott Coker’s Media Day scrum above. 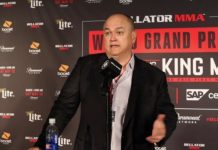