Juliana Velasquez lit up opponent Kristina Williams en route to a second round TKO win at Bellator 224 — and the performance may have been enough to earn a title shot.

A key fight to keep an eye on at Bellator 224 on Friday night was the flyweight battle between Juliana Velasquez and Kristina Williams. All involved seemed to be treating it like a title eliminator, although Bellator MMA had not official deemed it as such. Still, Velasquez was an undefeated 8-0 heading in, while Williams had been fighting some of the biggest names in the division. Even champ Ilima-Lei Macfarlane had interest in facing the winner.

Time would tell if a victory in Thackerville, OK at Bellator 224 would result in a chance for gold. But a statement was certainly made Friday night.

Velasquez looked a little tentative to start, firing a probing leg kick. Williams fired off her own kick to the body, with a little more authority. Williams high kicks would be plentiful early on, while Velasquez would land a kick to the calf, a little crisper this time. The first exchange saw Velasquez move in, but get hit with a counter, and back off. However, the next exchange had Velaquez landing clean with her jab, and following that with a combination. A third exchange had Williams backing up, under fire. Juliana’s hands were clearly the story, while Williams’ best offense continued to be her kicks.

Heading to the second, Williams was going to have to go back to the drawing board, as she’d spent too much time in the first on her heels. Williams did land a kick to the body of Velasquez early, which was showing some impact from Williams targeting it again and again. This time, it was Velasquez backing up, but in the crossfire, Williams was bloodied around the nose. Velasquez was landing her left seemingly at will, while Williams seemed to be hoping that one of her high kicks might change the complexion of the fight.

Instead, she was wobbled by a left, and forced back again as Velasquez moved in, lighting her up. Williams had plenty of heart, and a solid chin, but soon she was covering up, turning her head and dropping to her knees as the ref moved in for the save.

As for the title shot question, while a rematch between Ilima-Lei Macfarlane and Veta Arteaga might still be interesting, Velasquez, improving to 9-0, certainly threw her name in the hat Friday night. “This fight should have had happened already, but I’m patient,” Velasquez said of the title fight after the bout. 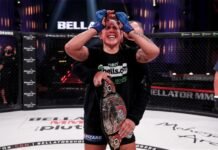 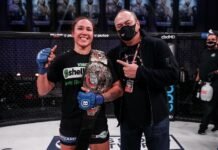