Bellator MMA was back in action Thursday, with a no-fuss, no-muss card from its frequent home away from home, the WinStar World Casino in Thackerville, Oklahoma. While a women’s featherweight title fight topped the card, the early preliminary action had a lot to offer.

Among the fights to keep an eye on, the return of jiu-jitsu ace AJ Agazarm, who the promotion was taking the slow build approach with. Hot prospect Jordan Young, who they could probably speed up the push for, was looking for another win at light heavyweight. Flyweight up-and-comer Bruna Ellen was back as well, but it was the women’s 145lb division that really stood out: former UFC star and Project Spearhead founder Leslie Smith was making her Bellator debut, against Sinead Kavanagh. And former title challenger Arlene Blencowe was taking on Amanda Bell.

The online prelims kick off at 6:45 PM ET — check below for full results. We’ll also have a live stream of the action when available! 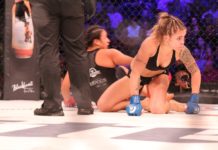