Max Rohskopf made it three in a row, all finishes, in his Final Fight Championship 38 bout, and spoke to Cageside Press following the win.

Cageside Press caught up with Rohskopf following his win, and the talented lightweight said that he’s looking up in terms of competition. “I want to start jumping levels fast. If I’m not having any adversity at all in my fights, I’m going to be a little bit disappointed. I want to feel prepared when I step up in competition.”

In particular, “he was explosive on the feet,” Rohskopf said, although he added that “I don’t think he touched me one time when we were on the feet.”

“I was surprised how strong he was,” he also admitted. “He reversed me from side control, which isn’t like a thing. That’s like a fat guy, white belt in jiu-jitsu thing. I gotta go back and look at that. But he was really strong, he was standing up in positions that like, it’s just not normal.”

“It was a good fight for me, I’m glad he came out and wanted to fight.”

Watch the full post-fight interview with Max Rohskopf above! 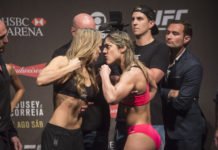