A fun-filled UFC Greenville card was topped by a blistering performance by The Korean Zombie, who finished Renato Moicano within a minute.

The main event of UFC Greenville (UFC Fight Night 154, or UFC on ESPN+ 12, for those keeping track) saw the long-awaited return of The Korean Zombie. Chan Sung Jung, who actually prefers being called Zombie, hadn’t really been away that long. But an incredible fight with Yair Rodriguez at UFC Denver in November let to a trip to hospital (for both men, actually), which Zombie was finished with an up elbow in the final second of the fight.

It was a fight Zombie had been winning. A fight that might have re-established the South Korean as a title contender. Instead, his hopes and dreams, at least momentarily, were crushed in an instant.

The Korean Zombie had no such momentary lapse in Greenville, South Carolina on Saturday. In an incredible performance that lasted under a minute, he stopped Brazil’s Renato Moicano in his tracks.

A huge right hand by Zombie early in the main event at stunned and dropped Moicano, and if you were dozing, you nearly missed it! A follow-up left hit the Brazilian on the way down. The crowd was on its feet, Moicano was on the floor, and Zombie was all over his opponent! Moicano survived, ever so briefly. Zombie appeared to think about working for a submission, but instead began raining down punches as Renato Moicano covered up. That forced the ref to make the save.

All in under a minute. Zombie, who had moved to the U.S. to continue his training, now looks poised to make a run at featherweight, which has returned to prominence during the Blessed era. 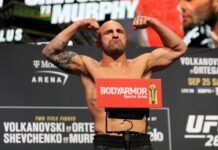