Bellator 223 is an expanded card from London with eight fights considered “main card” bouts, and Cageside Press is picking them all.

The picks below are sorted by the Bellator 223 US bout order. Scroll to the right to see all the fights.

Bellator 223 is headlined by a middleweight title fight between champion Gegard Mousasi and jiu-jitsu ace Rafael Lovato Jr. Mousasi most recently defended his title for the first time against welterweight champion Rory MacDonald and is 3-0 in Bellator. Lovato is a multi-time Brazilian jiu-jitsu world champion and is 9-0 in his MMA career with eight stoppages. 11 of 13 writers believe Mousasi will defend the title.

In the co-main event, legendary striker Melvin Manhoef will battle Kent Kauppinen. Manhoef has not fought since 2017, when he dropped two straight fights to then-champion Rafael Carvalho. Kauppinen is an English prospect who is coming off a knockout victory over former UFC fighter Alessio Sakara. Three writers are picking Kauppinen to pull off the upset.

Reality TV star Aaron Chalmers returns to the cage to fight Fred Freeman and was unanimously picked by Cageside Press.

Paul Daley and Erick Silva will battle in a matchup of two former UFC brawlers. Daley is 6-4 in Bellator, but has tailed off lately with one win in his last four appearances. Silva has also struggled, losing five of his last seven, including his promotional debut in his most recent appearance. Daley was also unanimously picked.

James Gallagher will look for his second win in a row after suffering his first career loss. Meeting him in the cage will be Jeremiah Labiano. All but two writers picked Conor McGregor’s training partner, Gallagher.

A pair of top prospects square off as Mike Shipman will face Costello van Steenis. 10 of 13 writers sided with Shipman. 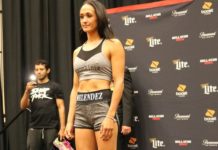