Light heavyweight is one of the all-time great divisions in UFC history. After hitting a lull in recent years, the promotion’s 205-pound weight class is full of fun once again.

It wasn’t long ago that the UFC’s light heavyweight division was the premier weight class in all of MMA. Featuring the likes of Chuck Liddell, Tito Ortiz, Rashad Evans, Rampage Jackson, and many more, we were treated to more than a few great matchups. Then, Jon Jones (and Father Time) happened.

Wiping out the division while the old guard faded from the title picture, the UFC’s 205-pound weight class quickly became a three-to-four horse race. Jones led the way (when he wasn’t suspended) and was chased by Daniel Cormier, Alexander Gustafsson, and Anthony “Rumble” Johnson. While the matchups between those four were undoubtedly fun and interesting, the rest of the division lagged far behind.

With Jones in-and-out of the promotion, Cormier inching toward heavyweight, Gustafsson consistently injured, and Johnson retiring, the future of the formerly famous division was bleak. Throughout the last 12-18 months, light heavyweight has hit a resurgence. The division has gone from great, to awful, and is now headed toward great yet again. That’s thanks to these various factors.

The Return of the King

It’s hard to have a great division without a great champion. When he’s available, Jones is one of the greatest champions in all of MMA. His resumé inside the Octagon is undeniable, and now that he’s keeping busy fighting, the light heavyweight division and the UFC are reaping the rewards. The 31-year-old is one of the biggest draws in UFC history, and having him holding the light heavyweight belt takes the division up a notch.

Jones is slated for his third title fight in a little more than six months, keeping pace with his plan to fight three times in 2019. That bout comes against Thiago Santos in the main event of UFC 239 in July during International Fight Week. Keeping the line moving in the light heavyweight title picture is important, given the start-and-stop nature of the belt throughout Jones’ various past reigns.

Without Jon Jones, the UFC’s light heavyweight division still has a bright future. But with him, it becomes one of the more interesting weight classes in the promotion.

The Rise of the (Former) Middleweights

One of the biggest reasons the UFC’s 205-pound division is looking more interesting is the influx of middleweights. Last year, both Anthony Smith and Thiago Santos moved up from 185-pounds. They’ve both made the most of those moves.

Smith is 4-1 fighting at light heavyweight, and is fresh off of a submission victory over Gustafsson. He’s earned three Performance of the Night bonuses in those five fights. His only loss has come in a title fight with Jones at UFC 235.

Santos is up next for Jones. His shot at the title comes after going 3-0 at light heavyweight, collecting finishes against Eryk Anders, Jimi Manuwa, and Jan Blachowicz. These successful jumps from 185-pounds to 205-pounds has caught the eye of a couple of other soon-to-be former middleweights.

Former middleweight champion Luke Rockhold is making his light heavyweight debut at UFC 239 against Jan Blachowicz. It’s a tough test for Rockhold. He’s fought once in each of the last three years, going 1-2 with knockout losses to Michael Bisping and Yoel Romero.

Another former UFC 185-pound title-holder, Chris Weidman, will be fighting at 205-pounds soon. He announced the move in June, with a fight in October being the gameplan. There are plenty of interesting options for his light heavyweight debut. Whoever he fights, a win would do Weidman some good. He’s 1-4 in his last four fights.

The most important and exciting aspect of the UFC’s light heavyweight resurgence is the trio of fresh faces rising up the rankings. All under 30-years-old, Dominick Reyes, Aleksandar Rakic, and Johnny Walker are the future of the division.

Walker is 3-0 since joining the UFC, earning a contract after winning on Dana White’s Contender Series in Brazil. He’s earned a Performance of the Night bonus in each win, finishing his opponents in a combined two minutes and 48 seconds. He’s a highlight waiting to happen with the on-camera charisma to back it up.

Walker is great, but Dominick Reyes might be the most talented of the bunch. Currently the fifth-ranked light heavyweight, Reyes is 5-0 in his UFC career. Most recently he earned an underwhelming split-decision win over Volkan Oezdemir in March. While it’s a great win, Reyes will have to perform better if he wants to stay in the light heavyweight title picture.

We can’t forget about Rakic, either. He’s undefeated in his Octagon career as well, improving to 4-0 after the biggest victory of his career at UFC Stockholm. Rakic unleashed a huge head-kick on Jimi Manuwa, knocking out the veteran after just 47 seconds. Now that he’s proven himself against a tough test like Manuwa, Rakic is due for a top-10 opponent.

With an all-time great champion to chase, and former champions and title-contenders scattered throughout the top-10, there’s no shortage of interesting matchups for all three fighters.

Those are the major highlights, but guys like Volkan Oezdemir, Jan Blachowicz, Ilir Latifi, Corey Anderson, and Glover Teixeira add valuable depth to a division that has lacked it recently. Each of these guys are legitimate contenders, and are tough tests for anyone making a run at the title at light heavyweight.

With a dominant champion, an influx of talent from middleweight, and a fresh crop of up-and-coming fighters, having the proven depth to challenge those different groups goes a long way in the development of a fun division.

It might feel weird to say, especially after the last couple of years, but the UFC’s 205-pound division is actually pretty fun right now. It’s been a while since that’s been the case. Let us know what you think by commenting below, on Facebook, or replying on Twitter! 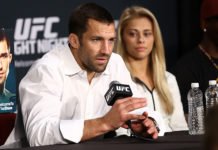