At UFC 231 in Toronto on Saturday night, top flyweights Katlyn Chookagian and Jessica Eye battled it out in an incredibly close fight that easily could have gone either way.

If there was one fight to keep an eye on other than the title fights atop the card at UFC 231, it was Jessica Eye vs. Katlyn Chookagian. And for good reason. Chookagian and Eye were both among the top flyweights in the promotion, making their battle in Toronto a potential title eliminator. With Sijara Eubanks heading to bantamweight, Nicco Montano in limbo, and several notable fighters coming off losses, the winner of Eye vs. Chookagian was certainly in striking distance of the belt.

Only one would move forward, and it was Eye moving forward early, bringing the fight to her opponent. Eye worked her jab, complimenting it with an overhand right. Chookagian was forced to circle away from harm, as Eye continued to attack, firing off combinations punctuated with kicks. Chookagian managed to land a couple of counters, but through the first three minutes was being outstruck by Eye. Chookagian would later hit home with an uppercut, but Eye was scoring with her kicks, and firing off more in the way of combinations.

Through the first five minutes or near enough, the fight remained on the feet; Eye would look for a trip to close out the round, but the horn sounded as they hit the canvas. In the second, Eye was again was pressing the action early, this time forcing a clinch along the cage. Katlyn Chookagian, however, reversed, and freed herself, drawing Eye back out into the center of the octagon. No interest in a grappling affair from Chookagian, it seemed. The pair would continue to exchange, including an exchange of knees out in the center. Chookagian was putting more and more together, making the second round an even closer affair than the first. With no further takedown attempts, and a razor-thin difference in strikes, Eye being the aggressor could actually play a significant role. Still, there was another round to go, in a fight that was still anyone’s to take.

Round three started in identical fashion to the previous two. Eye pressing forward, hands up, using her boxing. However this time around she connected with an overhand, potentially rocking Chookagian. However as Eye moved in for a follow-up, Chookagian was able muscle her down in a clinch, and land a quick flurry on punches on the ground. Eye would make it back up, but the opportunity to really take control of the fight had been lost. Chookagian was bleeding, but still in the fight.

Closing the fight strong!@BlondeFighter is looking to prove she deserves the next title shot! #UFC231 pic.twitter.com/SRTVBuCqYT

They’d finish the round with a takedown attempt by Jessica Eye, but Chookagian stuffed it, and the judges were left with an unenviable task. In the end, Eye would win a split decision in a fight that was very much a toss-up. 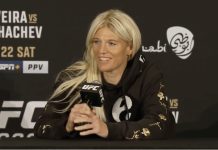