John Gotti III was welcomed back to cage at CES 56, but didn’t spend very long there, getting his fourth first-round victory in as many fights.

John Gotti III has an insane amount of hype surrounding him, and for good reason. For those who don’t know the history of the Gotti family, do a quick search on Google, you won’t be disappointed. The Gotti family and friends bring an immense crowd.

David Espino, a Cage Titans alum in Massachusetts, has finished all three of his victories. After an 0-2 professional start to his career, Espino has won three in a row and though he is in for a tall task with Gotti, Espino is capable of setting up a finish.

If you thought the crowd was loud for Jessy Miele, well you are in for a rude awakening.

Round 1: The Gotti chants are reigning. Espino opens with a few leg kicks before Gotti lands one of his own. Gotti lands a left and stuffs a takedown attempt from Espino. Gotti slams Espino to the ground with a takedown and immediately lands vicious ground and pound shots. A KO victory for the New York native, and a happy crowd two fights in a row here in Connecticut.

Gotti was laser focused for this fight. “I want to come out, feel you out, and then I attack and it’s a fight.” 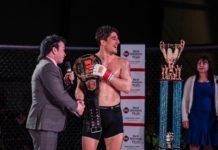 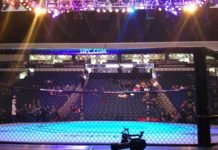