The regional scene is in focus starting on Wednesday night with CES 61, which will see John Gotti III top the card. On Friday, LFA 93 features top Canadian prospect Aaron Jeffery. Now on to this week’s MMA prospect report!

John Gotti III is best known as the grandson of the infamous John Gotti, the Italian-American gangster known as the “Teflon Don.” John Gotti the third is going down a different path, getting into MMA, and has looked really good so far. He’s a knockout artist who recently went the distance for the first time. That’s a plus, for him to get that in early in his career. He fights Nick Alley (6-3).

Raposo is only 4-0 as a pro but went 6-0 as an amateur and won two titles as an ammy. Raposo hasn’t been fighting the best competition but has performed as expected. At only 21-years-old, this youngster has a bright future. He trains with Joe Lauzon, Calvin Kattar, and Rob Font. His wrestling is all-around excellent from his timing to his execution. Good luck finding a takedown attempt he hasn’t completed. The job he does on the mat is fantastic work as well. Raposo has some dominant grappling and superior cardio. He fights Matt Almy (4-3).

Not completely sold on Ajim but 3-0 as a pro and 8-1 as an amateur can’t go unnoticed. On the feet he has good power in his hands. He’s good in the clinch with knees and throws well from range. He’s a bit wild and leaves his chin open which is a worry. Ajim seems to have better wrestling and his work with ground and pound seems to be his best weapon. Still a lot of unknowns but someone to watch for. He fights Kris Moutinho (7-4) who is his biggest challenge to date.

The  32-year-old Brazilian has been in the sport for nine years and with a lot of setbacks, he’s had more success. At least in the last five years, he’s only lost to good fighters and on the other side has beat good fighters. Lima is a dangerous striker with a lot of pop in his hands, his forward movement, his accuracy, and his bodywork. His biggest issue is his takedown defense but does well off his back. He’s competed in some grappling matches but at least in MMA he hasn’t been a submission threat. He’s still a threat overall with good top position and ground and pound. He fights Jackson Loureiro (11-1-1) who is someone I’m not impressed with.

Brazil has many good prospects and many very talented ones slip under the cracks. Caio Borralho is virtually unknown and part of the reason is because the footage is hard to find on him. Borralho started in Judo from the age of six and was State and National Champion a few times. He soon adapted to Jiu-Jitsu, muay thai, and kickboxing. Borralho is an athletic and explosive talent and from what can be seen of him, he’s really dangerous of the feet. He throws everything with bad intentions. He’s more of a striker but is well-rounded enough to threaten takedowns, thrive in scrambles, and find submissions. He fights Wildemar Santos (7-0) who lacks footage.

Mendonca does have problems with striking defense but on the feet, he’s held his own thus far. On the mat is where he’s best and so far his wrestling has been pretty good. Mendonça is legit on the mat with excellent jiu-jitsu. He only has two submission wins but you can see he’s always working to finish looking for a submission. Mendonca smoothy flows on top and can naturally transition from submission to submission. He sometimes can be too aggressive with submissions but his grappling all together he’s comfortable with. He fights  Pedro Nobre (21-5-2) which is a major step up in competition.

Jeffery is one of the top prospects out of Canada. His two losses are to Brendan Allen and Sean Brady who are two UFC fighters looking great. The Canadian Jeffery is a solid prospect at 27-years-old. Jeffery is comfortable on the feet with overall good boxing skills. He has a good jab and solid output with his hands. He’s strong against the cage with solid dirty boxing. Despite his output, he has excellent cardio. He fights Andre Petroski (5-0).

Outside of MMA, Andre Petroski is 97-30 in NCAA wrestling and dabbled in kickboxing as well with a 2-0 record. He’s a physical fighter who will muscle guys down with good wrestling but more so with strength. Andre has a very strong top position with active ground and pound and underrated grappling. He fights Aaron Jeffery (8-2)

I normally don’t put fighters on this list coming off a loss but Hughes impressed me so much in her defeat. In that fight, she was dominating en-route to a victory but got caught with an insane submission in the fourth round. Hughes has an excellent mix of striking and wrestling. She has a great understanding on when to shoot in and when to land with strikes moving in and out. Hughes has a good mix of punches and kicks putting everything together well. I have no doubt this woman is going to find her way to a big promotion at some point. She fights Danielle Hindley (4-1).

Fremd is a product out of Factory X and someone that has a bright future. The only thing that worries me is his suspect cardio and maybe his takedown defense. At least offensively he’s looked get finding finishes striking and on the mat. Fremd throws good output with tons of leg kicks and looping hooks in combinations. He’s also a strong wrestler and is a threat with chokes and ground and pound. He thrives in scrambles and is a fast big man. He has a good flow to his output and overall is someone that may be a breakout star in 2021. He fights Antonio Jones (7-3).

Johns is the younger brother of Contender Series contract winner and now UFC fighter Miles Johns. Like Brahimaj above, Johns is also a product out of Fortis MMA. His sole loss is from being on the wrong end of a split decision. Like his brother, Elijah is a technical striker with strong explosive wrestling. He needs a step up in competition but has still looked awesome recently. He fights Luke Faultersack (6-3).

Gorobets is one of the most electrifying prospects out there today. He’s a human highlight reel with finishes from a head kick, spinning back kick, Peruvian necktie, and a banana split. Gorobets is a legit all-around finisher and gets to work quite quickly with six first-round finishes. He’s dynamic on the feet throwing a bunch of different attacks from different angles. While he is a dangerous dude on the feet all around he’s an even better wrestler. Gotobets is a submission ace with three submissions all from different methods. He fights Oleg Khachaturov (8-3). 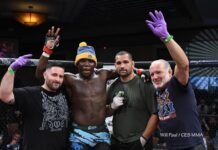