UFC 252 is ahead of us on August 15 at the Apex Arena. The event is headlined by current heavyweight champ Stipe Miocic and former champ Daniel Cormier, finally ready to settle their trilogy. Also on the card is Sean O’Malley in the co-main event along with Junior dos Santos , John Dodson and others. The prelims feature up-and-coming fighters and a few debuts. There are two fighters making their debut fighting each other this weekend, those being Christopher Daukaus and Parker Porter in a heavyweight bout.

How will Daukaus fare in the UFC:

Christopher Daukaus is an interesting case as he has some skills but also some glaring holes. He has one-round cardio, is always dangerous but slows tremendously as the fight goes on. His takedown defense is pretty poor as well. Getting taken down easily, he struggles off his back as well. Daukaus has decent jiu-jitsu but it’s not nearly where he should be given he’s fighting at a high level. Daukaus is a dangerous guy on the feet mainly with his hands. He has good boxing throwing the jab and always throwing combinations. He’ll do a lot of touch-touch-bang setting up his power strikes nicely. Not only getting it done with his hands Daukaus has dangerous head kicks and knees he uses. Overall I think he lacks speed, athleticism, a gas tank, and defense.

How will Parker fare in the UFC:

Parker has been in the sport for over a decade. He has actually fought Jon Jones and Gabriel Gonzaga on the regional scene. He also fought on the very first CES MMA event. Of the little I’ve seen of the grappling of Parker, he does of course have heavy top control and is dangerous with ground and pound and can crank on an arm. The way he gets it to the mat isn’t from wrestling as much as it’s him basically landing on top. On the feet, Parker is pretty good despite being a bit too wild. Parker has a nice overhand right he throws but can spam in over and over. He does a lot of chasing as well throwing wild looping hooks. He is wild but he hits hard, throws a lot, and attacks with the outside leg kick very well. Parker does slow down but does a good job always pressing the action and throwing output. He’s 35-years-old so I don’t expect much at all. He’s got some skills but isn’t fast enough nor nearly is he athletic enough for the top of the division.

When this fight was first announced I thought it was going be for the Contender Series, which would be more the level this is on. I think both men are lower-level UFC fighters but I’m sure both are going to bring it. I’m on the side of Parker in this fight just by a little bit. I think the biggest factor will be the better gas tank from Parker. If Daukaus doesn’t finish Parker early, which I don’t think will happen, I think he will fade much quicker. If anything I think Parker has the more likely chance of knocking out Daukaus. It’s a tough fight to call but the pick is Parker.

The bet I like is a straight bet on Parker Porter at -114 (BetOnline). The fight is close just like the lines show. It’s a pick-em and a pair of heavyweight debuting fighters so I’d personally stay away from this fight. If you are a dangerous man I’d consider just taking Parker straight. 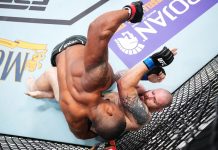 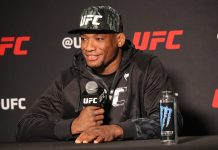