We got to know more about Anthony Salamone, a Greco-Roman wrestling specialist, who is an undefeated French middleweight prospect.

Born and raised in the North of France in the city of Tourcoing, Anthony Salamone wrestled since he was seven-years-old and would later start training in MMA to stay off the street. With no prior amateur career, Salamone made his pro debut on November of 2012 at only 17-years-old. After that first fight, he took nearly three years off to focus on his Greco-Roman wrestling career. He made his MMA return in October of 2015 and put up a 4-0 record in under two years. Salamone, before he moved to 5-0 last May, was out of the sport for another three years. The Frenchman took another break to devote more to his wrestling career. He also took the time off to develop his game and work on his physique for his MMA return, which happened earlier this month, since he is so young.

Check out this example of Anthony Salamone in action: 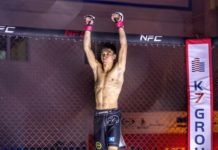