There are plenty of hot prospects around the globe in MMA. The hottest, however, will always be those who manage to compile a strong, undefeated record. Today, we’ll take a look at a trio of those, in Anthony Salamone, Laszlo Senyei, and Ruslan Sariev.

Fighting currently at the age of 24
Weighing in at 185 lbs
Standing at 6’0″
Hailing from Nord, Tourcoing, France
Training out of Team Tourcoing
A professional record of 6-0 with three submission wins

Where does Salamone Excel?

Salamone is a 3X French Champion in Greco-Roman, a Grappling France title winner, and a Division-1 Greco-Roman Wrestler. It’s no surprise his wrestling is his bread and butter. His wrestling excels more in the clinch where he’s better able to use body locks and trips. He will not shy away from shooting from the outside but at times telegraphs his attempts — but has the will to chain wrestle.

Salamone is a solid grappler excelling in scrambles. He moves freely on top cutting his way into mount easily and then taking the back. He has shown to be a threat landing ground and pound, but what’s even more of a dangerous tool is his submission attack. Three of his wins are in fact by submission. Salamone is an aggressive Greco-Roman wrestler who pushes quite a pace early on in fights.

Where does Salamone need improvement?

One of the main things I noticed is the gas tank of Salamone isn’t too deep. That showed in his last fight, and his fight against Jean Phael — Salamone significantly slowed down in the third round. He is super aggressive as previously said and the amount of energy he puts into wrestling seems to slow him down in the later portion of his fights. So far though Salamone has still been able to press forward and find those takedowns. As Salamone is  primarily a wrestler, on the feet he’s very hittable. When he isn’t pressing forward he stands upright and appears to be a bit too flat-footed.

If Salamone continues to fight the level of competition he’s been fighting he will most likely cruise to 11-0. I personally believe wrestling is the best base to have in MMA and that alone will expand his undefeated record. If he does come across someone with stellar takedown defense he may have a problem. I do learn more towards him making it to 11-0 due to his young age and his wrestling chops.

Fighting currently at the age of 28
Weighing in at 185 lbs
Standing at 5’11”
Hailing from Sashalom, Budapest, Hungary
A professional record of 9-0 with eight finishes.

Where does Senyei excel?

Where does Senyei need improvement?

Senyei to be quite honest, he has room for growth everywhere. On the feet, he throws a lot but is sloppy and throws technique right out the window. He holds his hands low and chin up asking to get hit. As his grappling is good a lot of times he finds himself on his back from poor takedown defense. Senyei is a bit dangerous off his back but as his competition gets harder he’s going to find it tougher to succeed off his back.

The short answer, in my opinion, is no. There really isn’t much in the way of stiff competition around where he fights but with all the footage he just has too many holes. Being too wild and being comfortable off your back can only take you so far in this sport.

Fighting currently at the age of 23
Weighing in at 125 lbs
Standing at 5’9″
Hailing from Beyneu, Kazakhstan
A professional record of 12-0 going the distance seven times.

Starting on the feet, Sariev is an excellent fighter. He throws a lot of output using his hands, legs, and knees going to the body, head, and legs. He’s a good Muay Thai fighter in the clinch and at range, he’s even better using his length. Sariev throws a lot of long punches leading with a rangy jab. He’s good off his back foot countering but really touching the chin with ease. Never repeating the same combination Sariev is always tricky throwing from different angles and finishing and starting with different attacks. He doesn’t tend to wrestle himself but is a good defensive wrestler. Sariev has excellent takedown defense with incredible balance and overall TDD IQ. His grappling is good, as he’ll be seen executing smooth transitions and just gliding on top effortlessly. He has three submission wins but that doesn’t give his submission game enough credit. Sariev seems to always be working for the submission and all three of his subs are different finishes. He’s won with an armbar, a rear-naked choke, and a peruvaian necktie.

Where does Sariev need improvement?

Sariev is good everywhere and has shown hardly any weakness. I would say the biggest thing is that he does slow as the fight goes particularly in the third round. He throws a lot of good output but isn’t too tight with his striking. That leaves him open for his foes to land the jab and a quicker striker most likely will beat him to the punch. Sariev doesn’t have any glaring holes but you’d imagine a good boxer could give him problems. With that said, it will take a good fighter to beat Sariev.

Sariev is very talented and has the overall skill-set to easily reach 17-0. Fighting for that GFC promotion he will get some better competition the more he fights there. His last three opponents has had a combined record of 15-3 at the times they fought. So the competition he’s beat has proven he is at least a good prospect. With how he’s looked I have no doubt he will reach 17-0 on the regional scene. 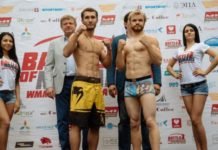 Scouting the Globe: The Five Best Prospects From Kazakhstan 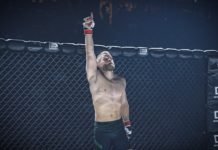