We go around the world to give you the best MMA prospects who are fighting this weekend, highlighted by ONE Championship: Enter the Dragon.

The Peru native is quite the showman and he has every right to be stringing together all his eleven wins in a row after losing his first two fights. Gavidia has a background in jiu-jitsu and was a boxing champion in China in 2008 and 2009. Gavidia is well-rounded as he has a good jab with leg kicks on the feet. He moves well on top, but is very heavy as well and while he has good ground-and-pound he does hold five submissions. Rudy still has a lot to prove as his competition has been weak and his takedown defense is a concern. He fights Emanuel Rivero (9-4) who won’t challenge him much.

The younger brother of strawweight prospect star Angela Lee, it could be argued that Christian is just as much of a prospect as his champion sibling. Lee is excellent on the feet, being quick and dynamic with excellent footwork. His abilities on the mat are there when needed, holding four submission wins to date. At only 20, Lee could be a future star but just needs to keep on progressing at the rate he currently is. He fights legend Shinya Aoki (43-8), who is on a four-fight win streak. This is a big fight for the younger Lee.

Saygid has shown impressive explosiveness in blitzes with a barrage of strikes and kicks as everything he throws is with ill-intentions. That includes his wrestling as well. Though it might better be described as him rag-dolling his opponents, showing the ability to suplex his opponent with ease. Saygid has two submissions and overall is very slick with his jiu-jitsu. At only 24-years-old the sky is the limit. He fights Amir Khan (11-5), who is on a two-fight skid.

Tonon is well-known in the world of BJJ as he holds accomplishments such as IBJJF Pan-American No-Gi Champion, IBJJF World No-Gi Champion, EBI lightweight champion, and much more here. Tonon has looked stellar in his MMA career and has even looked great on his feet. Tonon uses nice footwork, landing one-twos and throwing with a lot of output while moving in-and-out. He’s shown good wrestling, getting double-legs and trip takedowns. The mat is his world, as he finds dominant positions easily and while his ground-and-pound is very good, he is obviously a big submission threat. He fights Yoshiki Nakahara (13-4), who is on an eight-fight win streak. This will be the biggest test to date for Tonon.

Balmaceda is a nice prospect who has beaten some solid competition as his combined record (pro and amateur) is 12-1 with the sole loss coming to UFC fighter Mike Trizano. Balmaceda is a very skilled martial artist who was a high school wrestler and has shown well-executed takedowns in his MMA career. He is an even better striker who has power in his hands and is dangerous in bursts. He can slow as the fight goes but he is always in the fight and I really think this 24-year-old has a great future. He fights Sidney Outlaw (12-3).

Outlaw is always pressing forward and once he gets his hands together, he is most likely getting the fight down. He is a powerful guy and he also has very high grappling IQ as he knows when to level-change to complete the takedown. Once on the mat, he excels as he is a veteran of regional jiu-jitsu contests. He is the current Ring of Combat and Titan FC champion and fought a very competitive fight with top UFC contender Gregor Gillespie. He’s not the most exciting but he is dominant, especially on the mat. He fights Cesar Balmaceda (6-0).

Sabatini has only two losses in his career to top prospects in Jose Mariscal and Robert Watley. Sabatini does have a background in grappling, competing in several competitions, and has a background in combat sambo. Sabatini is clearly dangerous on the mat with eight finishes all coming by submission. He is very improved with solid trip takedowns, good ground-and-pound, improved stand up and excellent cardio. He fights Fabricio Oliveira (11-5-1) who is a good test for Pat.

Undefeated as a pro and also 4-0 as an amateur, Murphy has been nothing short of impressive. He likes to keep the fight standing and he likes to throw with both his right and left hand. Murphy has good footwork and solid kickboxing and when he mixes it all together it’s perfect, especially when he explodes in-and-out, landing combinations while simultaneously evading return fire. The Englishman does a great job using a lot of feints to set up some of the huge power he has in his hands. Murphy has also shown he can dominate a fight with his wrestling. He fights Manolo Scianna (8-3) who should be a step behind Murphy.

The Croatian has beaten some stiff competition including Lewis Long, Borys Mańkowski, and Dricus Du Plessis, winning five titles in his career. Soldic is always coming forward and always looking for the finish. Soldic has heavy hands and a very accurate head kick, which he has dropped so many opponents with. It’s the constant volume he throws with that allows him to do so well. He’s always throwing punches behind kicks and vice-versa. Soldic is the real deal. He fights Krystian Kaszubowski (7-0), who is good but not on the level of Soldic. 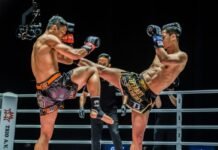