In a thrilling main event at UFC 237, Jessica Andrade came back from a one-sided first round to slam her way to victory, and the strawweight championship.

Strawweights were topping a PPV event for the first time at UFC 237 on Saturday night in Rio de Janeiro, Brazil. Perhaps long overdue, the 115lb ladies were fully in the spotlight. Champ Rose Namajunas was in enemy territory, defending her title against Brazil’s own Jessica Andrade.

Andrade was a fearsome striker, a former bantamweight who seemingly kept her power despite dropping weight classes. However, she had come up short against Joanna Jedrzejczyk in a previous title shot. Could she get the job done against ‘Thug Rose’ in her latest opportunity?

To open the affair, Namajunas worked her jab, feinted, and showed slick movement. In and out. Lateral. Rose was the quicker fighter, while Andrade’s feet seemed planted in comparison. Namajunas wasn’t just moving, however. She was landing. Her jab was doing its job. She caught Andrade coming in. The Brazilian would fire off leg kicks, one then another. But Rose was dancing in and out, and had bloodied Andrade early.

Andrade then hoisted Namajunas up, as the came together by the fence. Namajunas latched on with a kimura, preventing a slam. When Andrade finally did plant her, Rose immediately went to an arm-bar off the kimura trap, then threw an upkick and scrambled free. Somehow, Andrade’s biggest moment to that point turned into a highlight for Namajunas.

Moments later, Rose rocked Andrade with a knee, dropping her, then stormed in to follow up. The Brazilian survived, was still in it, but was bloodied and being outclassed. Something would have to change in round two.

The challenger opened the second frame with a leg kick, then charged in with a combination, all of which seemed to miss. A left did graze the champ a moment later, but Namajunas fired back. Then, Andrade went on the offensive, forcing Namajunas back. The champ’s jab continued to fire. The pair clinched, grappled for position, went down, popped up. They traded, both women swinging.

Then, the unthinkable. Andrade finally drove the champ into the fence off an exchange, then hoisted Rose up and slammed her! The thunderous slam knocked Namajunas out, at least for all intents and purposes! Namajunas was done, and Jessica Andrade, after being dominated in the opening frame, had captured the title! 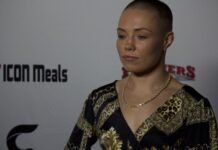