All fights are official for Saturday’s UFC Ottawa (UFC Fight Night 151), which sees Cowboy Cerrone squaring off with Al Iaquinta in a key lightweight match-up.

Friday morning in the chilly, rainy capital city of Ottawa in Ontario, Canada, all fighters from this Saturday’s UFC on ESPN+ 9 hit the scales. All things considered, the weigh-in for UFC Ottawa went off without a hitch. Kyle Nelson, making his sophomore UFC appearance, weighed in with a towel, but hit the featherweight limit on his first try.

Macy Chiasson, the winner of The Ultimate Fighter 28 at featherweight, did not hit the limit for her current home at banatmweight on her first attempt. However, after an extra hour was allotted, after a couple of tries, Chiasson weighed in at 136lbs even.

With that in mind, all fights are a go for the Ottawa card this weekend, which will be held at the Canadian Tire Centre, and air live on ESPN+ in the U.S., and TSN 4/5 in Canada. Donald ‘Cowboy’ Cerrone throws down with ‘Raging’ Al Iaquinta in what promises to be a thrilling main event.

Catch the full UFC Ottawa face-off video above! For full results from this morning’s weigh-in, head on over to our UFC Ottawa weigh-in page. 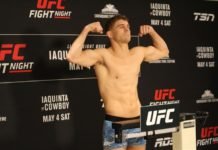