The UFC returns to Ottawa this weekend, and on Friday, fighters hit the scales for the official (and only) weigh-in for UFC Ottawa.

UFC Ottawa (UFC Fight Night 151 / UFC on ESPN+ 9) takes place Saturday at the Canadian Tire Center in Canada’s capital city of Ottawa, ON. The event is topped by a promising, and important, lightweight clash between Al Iaquinta and Cowboy Cerrone. In the co-main event, Canada’s own Elias Theodorou looks to push toward the top ten as he takes on Derek Brunson. And also on the main card, Cub Swanson was set to take on up-and-comer Shane Burgos.

There was no ceremonial weigh-in schedule for Ottawa, but Cageside Press will be on the scene and has you covered with live updates all morning! Weigh-ins kick off at 9AM ET.

Through the first half hour, all fighters had made weight. Most importantly, the main event was a go, with Al Iaquinta and Cowboy Cerrone successfully weighing in early in the two hour window. Macy Chiasson was the only straggler in the end, needing most of the extra hour to make 136lbs. 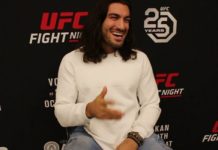 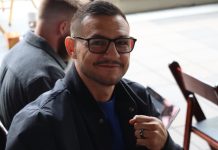