Greg Hardy scored his first Octagon victory at UFC Fort Lauderdale with a knockout in the first round against Dmitry Smoliakov.

Greg Hardy is a former NFL All-Pro whose career came to an end after a domestic violence incident. After an NFL comeback attempt with the Dallas Cowboys closed out after one season, Hardy took up MMA. Training with American Top Team, Hardy went 3-0 as an amateur with three first-round knockouts. He made his pro debut on the Contender Series and had two knockout victories in 74 seconds. Hardy then won by knockout outside the Contender Series and was signed by the UFC to fight Allen Crowder in the co-main event of the promotion’s first card on ESPN. After a spirited first round, Hardy hit Crowder with an illegal knee that led to a DQ loss.

Dmitry Smoliakov is a Russian fighter with a Master of Sports in Freestyle Wrestling. Smoliakov started his career 8-0 with four submissions and four knockouts. His success did not continue in the UFC, as he lost by stoppage twice and was subsequently cut from the roster. After winning a fight by kimura in Russia this January, he is back with the UFC to face Greg Hardy.

Greg Hardy landed a jab and a straight to start the fight. Smoliakov shot for a double that was easily avoided by the former football player. Hardy landed a head kick, then avoided another takedown. Hardy backed Smoliakov to the fence then dropped him with a right hand. Hardy rained down heavy ground-and-pound and Smoliakov could not withstand any more punishment, forcing the ref to stop the fight. 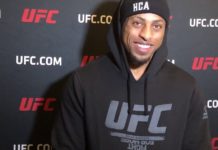