Glover Teixeira survived some punishment from Ion Cutelaba before submitting him in the second round at UFC Fort Lauderdale.

Glover Teixeira went 17-2 in Brazil before resolved visa issues finally allowed him to sign with the UFC in 2012. Teixeira beat his first five opponents, including Ryan Bader and Rampage Jackson, to earn a title shot. Jon Jones defeated him soundly, and Teixeira is 6-4 since then with five stoppages. Last time out, the Brazilian survived an onslaught from Karl Roberson to submit him in the first round in February.

Ion Cutelaba, a European Combat Sambo champion, started his career on an 11-1 run with all of his victories coming via stoppage. The Moldovan light heavyweight is 3-2 in the UFC. Cutelaba has knocked out his last two opponents, both in the first round. “The Hulk” was suspended for six months last year by USADA for a blood transfusion therapy.

The game plans were clear for both, entering the cage; with Cutelaba landing devastating knees and a clean head kick early on whilst Glover looked to take the fight to the floor without success. A jump knee followed by a spinning back-fist saw Glover rocked and downed in the opening round. The Brazilian made his way back to his feet and Cutelaba lost his sharpness due to fatigue. However, the early exchanges were more than enough to hand the first round to the Moldovan.

Glover opened the second round a lot more positively with accurate and powerful strikes, troubling the European on multiple occasions. He then managed to take the fight to his desired location, in full mount before taking his opponents back and sinking in the rear-naked choke.

The soon-to-be 40-year-old closed the night out in impressive fashion and showed his experience by weathering the storm and taking advantage of a physically fatigued Cutelaba with a slick choke, showing that maybe his time in the 205lb division isn’t quite over yet. 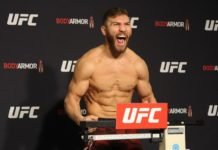