Gaston Bolanos lived up to expectations with an excellent striking performance at Bellator 220, knocking out Nathan Stolen in the first round.

Gaston Bolanos is a striking specialist with multiple Muay Thai titles to his name. After an 8-0 run in professional kickboxing, “Dreamkiller” signed with Bellator and continued his success in MMA. The Peruvian featherweight has gone 4-1 in his career with four striking stoppages, including a leg kick TKO.

Nathan Stolen started his career at 6-0 with four knockouts and two submissions. The Washington resident has struggled since then, going 2-4 and requiring the judges’ scorecards just once. Stolen made his Bellator debut last September, losing by first-round armbar. Bellator 220 will mark the first time he fights for the same promotion two fights in a row.

Gaston Bolanos got off to a quick start, landing quick combinations on the outmatched Nathan Stolen. Stolen took some shots, then dove in for a takedown and took the back of Bolanos. Stolen was unable to hold the position, spinning into guard. Stolen tried to trap an arm, but was unsuccessful. Bolanos hit him with a slick two-piece combination and floored Stolen, ending the fight in just over two minutes.

FULL FIRST ROUND – Nathan Stolen vs. Gaston Bolanos – This first round was 🔥!

The #Bellator220 Main Card is live now on 📲 @DAZN_USA!
Tune in with @SkySports in the 🇬🇧. pic.twitter.com/SjFi1unpUK 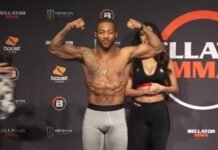