Paulo Costa has been sanctioned for using banned intravenous infusions (IVs), but he won’t miss any additional time and can resume his UFC career.

Another day, another fighter in trouble with USADA. And another retroactive suspension, this time for UFC middleweight Paulo Costa. On Friday, the anti-doping organization announced that Paulo Costa, as well as Carlos Costa, his brother, had been suspended six months following a finding that Paulo had “an intravenous infusion (IV) of permitted substances, including saline solution and a stomach medication, of more than 100 mL per 12-hour period after weigh-in for UFC 212 in Rio de Janeiro, Brazil, without a Therapeutic Use Exemption (TUE).” He later received a second IV, again against the rules, in November that year (2017).

USADA announced the news in a press release. The elder Costa brother, Carlos, was referred to as “Athlete Support Personnel” for Paulo Costa.

Although the infractions took place in 2017, the suspensions are retroactive to August 10, 2018, when the pair acknowledged the IV use. Given both men have been handed six month suspensions, Paulo Costa is already eligible to return to action. Carlos Costa was suspended as he was the party who administered the IVs to his brother.

“In 2017, IV infusions and/or injections of more than 50 mL per 6-hour period were prohibited except for those legitimately received in the course of hospital admissions, surgical procedures, or clinical investigations under the UFC Anti-Doping Policy,” Friday’s press release noted in part.

Costa (12-0) last fought at UFC 226 in July 2018, where he defeated Uriah Hall. Many had expected him to return against Yoel Romero at UFC Fort Lauderdale this weekend, but for obvious reasons, that fight did not come to fruition. 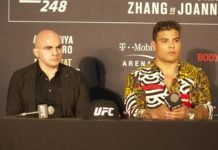