Parnasse is a good talent with 13 total fights at only 21-years-old. Parnasse would prefer to keep the fight on the feet where he can use his effective movement and a good kickboxing base. On the feet, he does a good job at moving in and out and really loves to attack with leg kicks, which set up his strikes better. One of his best attributes is his cardio as he can fight at the same pace for three rounds, which often puts him above his opponents. Parnasse has four wins by submission, all coming via choke, so he is well-rounded in all areas. He’s the real deal. He fights Roman Szymanski (11-4), who Parnasse should beat.

Kesik is very underrated and is one of the best, if not the best, Polish prospect out there. Kesik is exciting, bringing an aggressive kickboxing style with a lot of power in his hands with five finishes by way of KO/TKO. If needed, Kesik will take the fight down where he is really talented with position control and transitions. He fights Jakub Kamieniarz (7-5) who is on a three-fight win streak.

The veteran from China has a lot of experience and has losses to UFC fighters Shane Young and Movsar Evloev. Now though, Lu is on a 10-fight win streak. On the feet, Lu has good kickboxing and will throw hands. He’s more so a guy that wants to get the fight to the mat. His wrestling isn’t great, but once he closes the distance he’s good at tearing his opponent down. Lu has submission wins but it’s his ground-and-pound that makes him special. He generates a lot of power from a short amount of distance and has spilled a good amount of blood from his opponents in the past. He fights Ruslan Khisamutdinov (8-7).

Martin carries a lot more weight than most fighters but that doesn’t stop him from being a solid prospect. He is foremost a wrestler and a very strong guy, being able to lift opponents and slam them to the mat. Once on top, he is staying there as he knows how to use his weight but doesn’t just lay and pray. Martin has very good ground-and-pound and on the feet, he does have knockout power and relies more on his wrestling. His loss is to veteran Leroy Johnson but his last win came against Contender Series and TUF fighter Josh Parisian. He fights Jesse Hernandez (7-2) who has fought good competition so this is a good test for Brett.

At only 26, Lamson has a lot of experience with 12 pro fights and 17 amateur fights (17-0). First and foremost, Lamson is an excellent wrestler having wrestled at Michigan State University. The wrestling skills have translated nicely to MMA thus far. Lamson doesn’t tend to strike much, but he does hold power, but then again, he finds it much easier to get the takedown and get the back and unleash ground-and-pound. He fights Robert Hale (6-3), who is a good opponent. If Lamson wins, the UFC should be next.

There aren’t gonna be many fighters that will want to stand with Bolanos if they watched his fights or simply know of him. He is a two-time South American Muay Thai Champion, U.S. Muay Thai Champion, and a two-time USA representative at the IFMA World Championships. He started in combat sports at the age of 10 and now at 26, he could very well have a bright future. He’s super technical but more so explosive with his offense including straight punches, damaging leg kicks, and his signature spinning elbow. He fights Nathan Stolen (8-4), who is a big test for Gaston.

Williams was last seen on the Contender Series last summer. Even though he took that fight on one week’s notice, he beat Tim Caron but wasn’t awarded a contract at the end. Williams has fought decent competition lately and with only two losses, one of those is to UFC fighter Dwight Grant. On the feet, he does have knockout power but he’s an excellent wrestler more so. Williams has some slick jiu-jitsu and fight-ending ground-and-pound. He fights Diego Herzog (4-2-1).

Loroco the 24-year-old fights with a karate/taekwondo stance. He strikes mainly with his kicks and has shown a flashy attack. Laroco loves to go head-hunting with his kicks and that’s with hook kicks, spinning heel kicks, and lightning-quick roundhouse kicks. He’s very athletic and dynamic, throwing a lot of risky attacks and that have caused him to be taken down. Loroco has shown good get-up ability and even has a triangle finish. He’s well-rounded and I think is the real deal. He fights Josh San Diego (8-4), who is a good test for Loroco.

Undefeated as a pro, Gonzalez also went undefeated as an amateur at 8-0. Gonzalez has always been an excellent wrestler who was an All-American, but he’s been adding a lot of striking to his resume. J-Train could use better footwork, but he stays aggressive and has good right and left hooks, but really just uses strikes to set up takedowns. Overall, I think he’s good, but there is still room for improvement. He fights Bruno Ferreira (8-1) who is coming off a loss. 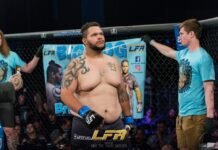 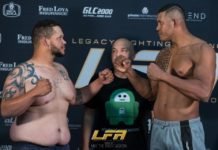